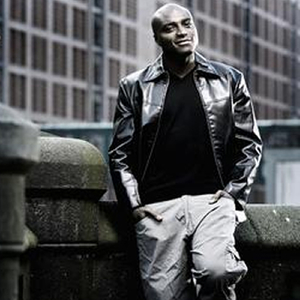 There is more than one artist with this name: 1) Nana Kwame Abrokwa (born in 5 October 1968 in Accra, Ghana) is a German rapper and DJ, performing under the pseudonyms Nana or Nana / Darkman. Nana is not an actual first name, but a Ghanese title of nobility. His most important achievement came in the second half of the 1990's, when his style was characterized as "euro-rap" and his lyrics focused on the relationship with God, with his family, or on topics like racism and Holocaust.

1) Nana Kwame Abrokwa (born in 5 October 1968 in Accra, Ghana) is a German rapper and DJ, performing under the pseudonyms Nana or Nana / Darkman. Nana is not an actual first name, but a Ghanese title of nobility. His most important achievement came in the second half of the 1990's, when his style was characterized as "euro-rap" and his lyrics focused on the relationship with God, with his family, or on topics like racism and Holocaust.

Nana arrived in Hamburg with his mother and his brothers at the age of 10. At the beginning of the 90's, his debut consists of DJ-ing in hip-hop clubs. he also co-produces and raps in some songs of DJ David Fascher ("Here We Go", "Make The Crowd Go Wild"), under the alias MC Africa True.
Nana's first solo song was released in late 1996 and was called "Darkman". The song was a big success in Europe, especially in Germany, Austria, Switzerland & the Benelux. This was a new style of music that Europe saw. This was the beginning of the European Rap & HipHop era. The real breakthrough for NANA came with the next single, "Lonely". It was a super-hit of 1997 europe-wide. "Lonely", stayed over 1 month at number 1 in Germany! Nana followed with the singles "Let It Rain", "He?s Comin?" & "Too Much Heaven" from his debut album "Nana - The Album". That albums features many acts like Jan VD Toorn, Jonestown, Pappa Bear, Alex Prince & Mazaya, and a lot of other Booya Family members. There are at least 2-3 more hit potentials on the debut album of Nana, and it is concidered as the breakthrough for the European Hip Hop & Rap music. Ecxept for the hit singles, the songs "One Second", "Why?" and "1,2,3 Are U Ready?" should be remembered.

In the middle of 2008, the big announcment that so many have been waiting for, was finally hear. Nana's new album "12.Y.O", which means "12 years old" and refers to the amount of years since his "Darkman" debut single, was to be release in September 2008. It's a double album. One that was suppose to be the "Believe" album, and one new album, where there are also four remakes of his old hits "Lonely", "Darkman", "He's Comin'", "Let it rain" and "Remember The Time". On the album he co-works with artists as Braheem, O.O.D, Sibela and Manuellsen. Also some of Romanias best artists, Korekt and Lavinia, helped Nana to do a Romanian version of Lonely'08 aswell. On the album, you find some typical Nana songs like "No Sun", "Where you belong" with that classic style, and also some songs with fresher sound as "Any 1 Out There", "If you were here" and "My Get Away". The albums first single is called "My Get Away".

3) NANA is an OST to the movie of the same name, however the singers for the soundtrack should be tagged as either NANA starring MIKA NAKASHIMA, REIRA starring YUNA ITO, Olivia and ????? - depending on which song from the OST you have.

4) Nana can also refer to Nana Hedin, also known as Nana, Na Na, and Nana d'Aquini, who is an internationally known vocalist from Sweden. She was born in Eskilstuna, Sweden, on 24 May, 1968. She started singing at age three and her first performance at a Children's Day festival when she was five. When she was older, she often worked as a street musician. She spent a few years in the late-80s/early-90s as a member of the band Chris At The Moment before starting to work with Dr Alban, going on a world tour with him in 1992. The next year she joined Swedish author and comedian Jonas Gardell (where she would also eventually work with Sarah Dawn Finer) on tour, and has continued performing with him on and off to the present day.

Hedin is best known, however, as a well-repected backing singer and the voice of many acts in the eurodance genre. Her lead vocals are well known to listeners of E-Type, Stakka Bo, Dr Alban, and Flexx, as well as her own solo work. She has also done background vocals for many of the world's top artists, like Ace of Base, C&eacute;line Dion, Herbie, Britney Spears, Papa Dee. Five, Safe, Aqua, DJ Bobo, Dana Dragomir, Graaf, Gary Barlow, Amadin, & A*Teens, as well as many others.

Her first solo song was called "I'm Alive", co-written with Mikael Hujanen and Johan Nilsson, which was not the dance music she was known for. Nana recorded a dance cover of Irene Cara's "Fame" in 2001 as Nana d'Aquini, but supposedly none of the follow-ups produced in-studio were considered good enough to release. She's also been active in doing vocals for advert music, and adding her vocals to a track from the Swedish movie "Bert - den sista oskulden". In 2004, she participated in Melodifestivalen with E-type (the contests to pick the Swedish entry into the Eurovision Song Contest) with the song "Paradise", but it did not make it to the final round. She also released a cover of The Weather Girls' hit "It's Raining Men" on the Absolute HitMania compilation CD. In 2005, she also participated in Melodifestivalen, this time as a solo artist, singing "Wherever You Go". This song also failed to reach the final round.

She has many favourite artists from many different genres, like Sting and Gladys Knight. She likes films from Luc Besson (with the music of Eric Serra), and "Rumblefish", starring Mickey Rourke. She has reddish-brown hair and blue eyes, with freckles in the summertime. She's 1.56m (5'1.5") tall. Her favourite colour is blue, and she enjoys watching the moon. There is a blue moon in a dreamcatcher tattooed on her shoulder blade. She also likes SCUBA diving and collecting masks from the many countries she's visited. Her favourite foods are pasta and Thai food.

Currently she is battling tongue cancer, and has not made any singing appearances since then. Being treated with the radiation and chemotherapy may give her an excellent chance of recovery but could affect the salivary glands in the mouth, which would no longer be able to lubricate the vocal folds as well, and her voice could be affected as a result.

Her official site is www.nanahedin.com.

5) Nana (nana?) is a brazilian singer and songwritter from Salvador, Bahia. She performs with her boyfriend, Jo?o Vinicius Santana, and does a mixing of bossa nova and indie pop music.

Her official site is Ouvindo Nana.

6) Nana is an anime and video game cover artist who specializes in vocals, piano, and wind instruments. She has been invited to perform at anime conventions throughout the Midwestern United States.

7) NANA is a hardcore band from Stuttgart, Germany. The band was formed in 2004. Their official site is www.nana-hardcore.de.

8.) Nana is a singer from Syria

The Best Of Nana

Daughters Of The Sun