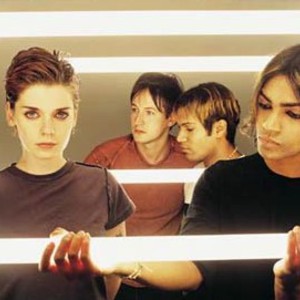 My Vitriol are an alternative rock band formed in 1999 in London, England. The band takes its name from "Brighton Rock" by Graham Greene. In the story, the main character carries a bottle of vitriol (an idiomatic name for sulphuric acid) for self protection. The band currently comprises Ravi Kesavaram (drums), Som Wardner (vocals, guitar and lyrics), Seth Taylor (guitar) and Lauren (bass). Former member Carolyn Bannister (bass and backing vocals) left the group sometime in 2005. The band has so far remained silent concerning her departure.

Ravi and Som met at UCL in early 1998. They lived opposite each other in halls and were both were studying similar degrees; Som studying Genetics and Ravi studying Biochemistry.[1] They were both involved in the local music scene, but it wasn't for a year and a half until they played together. Som had written a few songs and a friend of theirs decided to help them record a demo as a project for his studio engineering course. Ravi played the drums, Som played the rest of the instruments and they put together an EP called "Delusions of Grandeur" in the space of just two days, using every free studio session they could.

About 250 CD-R copies of "Delusions Of Grandeur" were pressed but only about 30 actually worked, due to technical reasons. However, one was handed to Radio One DJ Steve Lamacq at a gig. Within days, Lamacq had broadcast a track on the Session Unsigned slot, which led to greater publicity for the band in the form of the track' Grounded' being used on the 'Organ Radio 5' compilation.

Ravi and Som needed to complete the line up of the band, to give them a fuller sound. They met guitarist Seth Taylor (bassist of Mint 400) at a Mint 400 gig and discovered Carolyn Bannister playing bass at another gig. The band soon released their d?but, double A-side single 'Always: Your Way/Pieces', on Org Records on the 6th of December 1999.

In the last week of 1999, the band signed a deal with Infectious Records, home to other acts such as Ash and Garbage. Their first single under this new label was 'Losing Touch', released in April 2000, and the second was 'Cemented Shoes' which made number 65 in July of the same year.

Their third single, 'Pieces', charted at 56, but the fourth, 'Always Your Way', was the first to reach the Top 40, peaking at number 31. Soon after this, the band's debut album, Finelines was released and it made number 24 in early March 2001.

They landed support slots with many major acts, including Feeder, Placebo and the Manic Street Preachers. My Vitriol appeared numerous times on TV shows such as Top of the Pops, as well as festival performances such as Glastonbury, V Festival, T in the Park and main stage Reading/Leeds to 40,000 people and a nighttime higher billing the following year.

The band headlined their first festival stages in Holland on the mainstage in Rotterdam, and the indoor arena in Norway's Quart. They also performed across Europe at Roskilde in Denmark, Festimad in Spain, and to 20,000 people at Rock am Ring in Germany. At Summer Sonic in Japan, where Sony Music released their debut, they played to 18,000 people. Their first and only headline show in Tokyo sold out in hours and the venue had to be upgraded twice.

Despite being essentially an alternative act, the bands music eventually worked its way through to various mainstream TV shows such as Buffy the Vampire Slayer amongst others and were even offered Hollywood movie roles, and modeling jobs from the likes of Ralph Lauren, and Next along the way. Concerning this, "we thought it would be better to stick to what we knew best!" drummer Ravi Kesavaram joked.

Despite having only played outside of Europe in Japan, 'Grounded' was a hit in South Africa and the band starting to gain interest from Asia and South America. This was partly due to the surprise circulation of "Delusions of Grandeur" EP. This buzz lead to the band signing the US release rights of the record to Sony/Epics for a reported $400,000. Part of the deal was to remix/tweak the album with Guns N' Roses/Metallica producer Steve Thompson.

On hearing the US mixes, Infectious records made the decision to re-release this version in the UK as a double album format, including B-sides and rarities, forming the complete works of My Vitriol to date.

At the end of 2002, after 3 years of solid touring, lead singer Som Wardner announced My Vitriol's touring hiatus at the Kerrang Festival, saying "We won't be around for a while. We're going to take a break and write a new record. Thanks for supporting us from the beginning."

Despite their "hiatus", My Vitriol's popularity has persisted since the release of their debut record due to their loyal cult following. An unannounced "secret" show in Islington in January 2005 sold out all 1000 tickets months before the show, most probably due to word-of-mouth and via the internet.

A second one-off show took place at the 1500-capacity KOKO, Camden, London, on November 24th, 2006, supported by The Cinematics and Pure Reason Revolution. My Vitriol took this opportunity to introduce their new bass player, Lauren, who replaces Carolyn who left sometime after the 2005 Islington gig. A number of new songs were played, although it was uncertain whether the band have the intention of releasing them.

March 2007 saw the release of the single 'This Time' under the name A Secret Society on Org Records, limited to 1000 copies, the single also features a cover of the Lemonheads 'It's a Shame About Ray'.

Also confirmed in March were the details of the next gig and single release. The gig itself was originally slated for May 25th at the London Astoria, however this has since been postponed until September 29th 2007. while their single "War of The Worlds" will now be released on June 11th via digital download.

My Vitriol will also make several festival appearances during 2007. So far they have been tentatively confirmed for:
Isle Of Skye Festival 2007
Download Festival 2007 (Dimebag Darrell Stage on Saturday, June 9th)
Guilfest 2007 (Headlining the Rocksound Cave on Friday, July 13th)