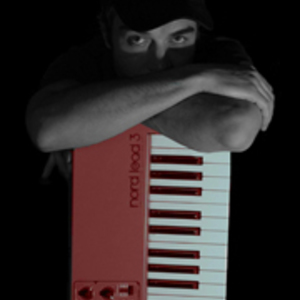 Moogwai a.k.a. Chab a.k.a. Francois Chabloz is hot property in the world of electronic music. Swiss born, grew up in Italy and currently residing in Switzerland, things appear to be going from strength to strength for this man with his unique melodic take on the current prog and trance sounds. If you have never heard of Moogwai, then you may recognise him under his other guises, such as Chab, Star (Check his "Rock Rose" on Platipus & The Chab on Gekko) or the producer behind early Dj Nukem's records.

If you have never heard of Moogwai, then you may recognise him under his other guises, such as Chab, Star (Check his "Rock Rose" on Platipus & The Chab on Gekko) or the producer behind early Dj Nukem's records. His first Moogwai release, "A Night Out" and the self titled "Moogwai" have already graced compilations such as Paul Oakenfold's "Essential Millenium" as well as
the much acclaimed Best Of Platipus CD, mixed by Anthony Pappa. Platipus discovered Chab via a demo tape sent to the office. His next outing was the limited Keo, which was overtaken by the enormous club success of "Viola" - a massive Oakenfold championed record which went on to be one of the tunes of 2000, featuring on over a million compilations.

The summer of 2000 didn't really exist for Francois, the new label was far more important than the sun. His knew his time, effort and energy would eventually turn into reality that once began as a distant dream......he can now safely say that it has. Chab, his deeper alter ego (now signed to SAW Recordings), was the producer to have on your label. For proof, check his 'Tunnelling' on Plastic Fantastic, 'Matica' on Undercurrent and, most recently, the awesome 'Dub Sessions' on SAW. Chab's music has been selected for 6 different Global Underground "trendsetter" series.

In addition to his impeccable music production, his flawless mixing on the wheels of steel has rocked many a venue worlwide. His next Platipus release -"Labyrinth"- a double vinyl twisted euphoric stormer selected on Tiesto's "revolution" compilation. Scott Bond and Matt Hardwick were all over the record before it was even pressed!

After a year off concentrating on his Chab project, Francois has returned to the Platipus
fold with the almighty 'Neon'. Scheduled for release in June 2003, this is the kind of return only Moogwai could make. With subtle melodies bubbling under the thumping drums and a synth line that will leave Gatecrasher begging for more, 'Neon' could be Moogwai's biggest track to date... then again, wait 'til you hear the remixes of Viola, due out 28th Feb 2005 (see reactions below).

Musically 5 Wishes & More combines elements of deep, melodic, uplifting trance and progressive production that all add up to the characteristically unique Moogwai sound.

Some quotes from DJ's on the exclusive Viola remix featured on the album:

Dave Pearce (Radio 1) - ?#2 in chart and caning it on the shows !!?
Judge Jules (Radio 1) - ?Playing on show and in the clubs. Huge!?
Adam White (Euphoria) - ?This is an absolute monster. Going on my new Australia compilation. Tek^tonik mix does it for me. Love it!? 10/10
Adam H (Juice FM) - ?Very very good. Caning the Brisky mix and its featuring in my trance mix on the show .?
Big Al (Vibe FM) - ?Awesome!!!? 10/10
Andi Durrant (Galaxy FM) - ?HAMMERED this over Xmas and New Year. Played on every radio show and caning it out and about. Gone down well everywhere. Both mixes superb.?