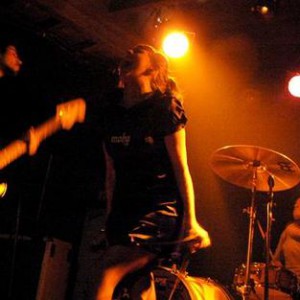 There are at least 6 bands using the name Monarch. 1) Filthy, dirty sludge doom band from France with a female vocalist. See Monarch! ?????????- 2) The Seattle-based band Monarch currently has two critically acclaimed albums, Lowly and The Grandeur that was Rome, and are working on their third. Lead singer/songwriter Brennan Strawn's influences include Elbow, Radiohead, Sigur Ros, The Beatles, Oasis, and Massive Attack.

2) The Seattle-based band Monarch currently has two critically acclaimed albums, Lowly and The Grandeur that was Rome, and are working on their third. Lead singer/songwriter Brennan Strawn's influences include Elbow, Radiohead, Sigur Ros, The Beatles, Oasis, and Massive Attack. Their shows are known for a "Paint with Monarch!" theme, where they provide art supplies for attendees who feel inspired to paint and draw and create their own art during the performance.

Originally from Pittsburgh PA, Monarch is signed to Northern Records of Orange County where they released "The Grandeur That Was Rome" in 2003 and "Lowly" in 2007, featuring collaborations with members of the bands OneRepublic, Pedro the Lion, and Starflyer 59. As their music has been dubbed as ?melodic-driven indie pop,? Monarch has been compared to bands like Elbow, Sigur Ros, Keane, and Denali.

3) 5 piece thrash metal band out of Wilkes-Barre, Pennsylvania. The band began in early 2004 and is currently going stronger than ever. Coming from a depressed coal area, Monarch rises above it all to bring the listener songs that are sincere, positive, and fun. Those are three adjectives not used very often to describe a metal band. However, Monarch is not your average ?brutal? metal band. With influences ranging from Darkest Hour to Texas is the Reason, the band is not afraid to incorporate something new if it means that it will add substance to a song.

This is one band that puts their heart and every ounce of energy they have into everything that they do. Their brand new ep has already earned them the attention of some of the industry's leaders.

*Due to legal reasons, Monarch has changed their name to ?To Outlive the Beginning?

4) A genre-bending metal band from Richmond, Va. Monarch has existed since around 2002. The band released ?Tragedy Holds the Hand of Hope? CD/EP on Pop Faction Records in the spring of 2004 and proceded to complete an east coast tour with Accursed Dawn in the fall of 2004. Monarch's debut full-length, simply titled ?Monarch?, was released in 2005 via Pop Faction; another tour ensued, this time with fellow Richmond residents Battlemaster.

A split release is planned between Monarch and Battlemaster/Municipal Waste side project Cannabis Corpse.

More info on Monarch as well as the self-titled LP and the Tragedy Holds The Hand of Hope EP are available here.

5) Finnish death metal band that was found on 2003 and became inactive and later on split up a bit after releasing their one and only demo on 2006 which can be heard on http://mikseri.net/monarch

The latest members were

6) A two-man electronic drone/stoner doom metal band from Silkeborg, Denmark. They formed in 2009 and make their music entirely on computers. See Myspace to listen to their tracks.
They are heavily influenced by Xasthur, Sunn o))), Electric Wizard and other black metal/doom metal bands and groups.

Beyond The Blue Sky