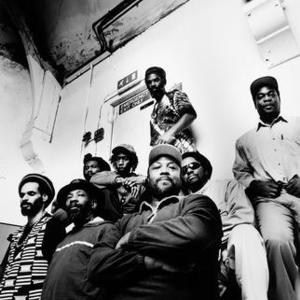 With a career spanning four decades, Misty in Roots are one of the UK's finest reggae groups. The band was one of the most powerful live reggae acts to emerge from 1970s London, and they were a major force in the Rock Against Racism movement. This British based Roots Reggae Band MISTY IN ROOTS have played together for the past 20 years, first coming together in 1975 and working as a backing band for the late, great Nicky Thomas - one of Jamaica's all time greats who had achieved national chart success with songs such as "Living In The Land Of The Common People".

This British based Roots Reggae Band MISTY IN ROOTS have played together for the past 20 years, first coming together in 1975 and working as a backing band for the late, great Nicky Thomas - one of Jamaica's all time greats who had achieved national chart success with songs such as "Living In The Land Of The Common People". Nicky Thomas was the inspiration from which MISTY developed.

By 1978 MISTY IN ROOTS began to develop their own orthodox roots reggae sound. Their powerful lyrics inspired by the economic decline, a growing awareness of their African culture and a spiritual awakening inspired tracks as "GHETTO OF THE CITY", "SODOM & GOMMORA" AND MANKIND" all off which can be found on the band's first album 'LIVE AT THE COUNTER EUROVISION'.

During the period 1977/78 the political situation in the U.K. was a breaking point. Black consciousness was at its peak and racism roamed the streets of London. Unemployment was affecting both black and white youths and through this depression a new musical alliance was born, young white youths totally fed up with the status quo turned to playing punk music whilst at the same time identifying strongly with the British reggae acts as MISTY IN ROOTS, STEEL PULSE and ASWAD. With the coming of the ?Rock against Racism' movement the musical fight-back had begun and for the first time black and white musicians were playing together on the same platform bringing about a totally new concept in musical awareness.

MISTY IN ROOTS one of the most powerful live reggae acts to have come out of London and noted for their powerful roots reggae sound and uncompromising lyrical vibrations, became the major force in Rock Against Racism, playing more concerts than any other band in the movement. This opened up a whole new audience for the band who quickly developed a very strong cross over audience, playing with acts such as Tom Robinson, The Ruts and Elvis Costello.

Despite MISTY'S huge success as a live act the band did not release their first album until 1979. The album LIVE AT THE COUNTER EUROVISION, which was recorded live in Belgium during the band's 1978 tour, is today still proclaimed by many critics as the best live reggae album of all time. MISTY followed LIVE AT THE COUNTER EUROVISION with a string of limited edition singles such as "OH WICKED MAN", "RICH MAN', SALVATION", "HOW LONG JAH" and "SEE THEM AH COME".

By 1982 MISTY IN ROOTS was a force to be reckoned with but because of their determination to remain independent the band took a major step into Africa spending nine months in Zimbabwe and Zambia. The period spent in Africa had a major impact on the development of MISTY'S following two albums EARTH and MUSI O TUNYA, both of which were directly inspired by the band's experiences in Africa.

EARTH released in 1983 was moving musical documentation of the devastation caused to mother Earth by mankind because of greed, cruelty and ignorance. The album consist of classic tracks as "FOLLOW FASHION", "EARTH", "POOR AND NEEDY", "OWN THEM CONTROL THEM" and "SERVANT TO JAH".

MUSI O TUNYA released in 1985 was a reflection of the band's love for Africa. MUSI O TUNYA (THE SMOKE THAT THUNDERS) is a beautiful place where Zimbabwe and Zambia meet and the great Zambezi river gives up all its might to form one of the most beautiful sights of Southern Africa. The falls MUSI O TUNYA are known in English as Victoria Falls.

During 1987 MISTY IN ROOTS took their first trip to West Africa, the spiritual home of their ancestors, it was indeed a pleasant experience to set foot in the region after four hundred years in exile.

1989 saw the beginning of a friendship between MISTY IN ROOTS and KAZ RECORDS which resulted in the release of the album FORWARD which saw MISTY reach the heights once again.

Now as we approach the millennium we can look back over the works of MISTY IN ROOTS and see how immense the combined talents of this cooperative group, producing uplifting righteous music for all to hear. And how right they were staying with their roots and not following trends such as dancehall music, which has withered away with the new growth of 1990s uprightful conscious roots music - right back where MISTY IN ROOTS were coming from nearly twenty years ago.

Live At The Counter Eurovision 1979