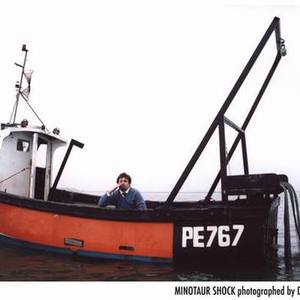 Recording and producing under the name Minotaur Shock, Bristolian musician David Edwards has released three albums and a compilation of EPs. The first, ?Chiff-Chaffs and Willow Warblers? came out on the Melodic record label in 2001. In 2005, Minotaur Shock signed to 4AD records and released the album ?Maritime?. The most recent album ?Amateur Dramatics? came out in 2008 on 4AD (and Audio Dregs in the US).

David has done a bunch of remixes for the likes of Gold Panda, Bloc Party, Super Furry Animals and Holy Fuck, and toured the UK with Yo La Tengo and, more recently, Ratatat.

He has completed original scores for theatre production, and has finally worked out how to present Amateur Dramatics on his own live, using a drum kit, guitar and various MIDI controllers. David is currently working on new music and enjoying dragging a drum kit around again.