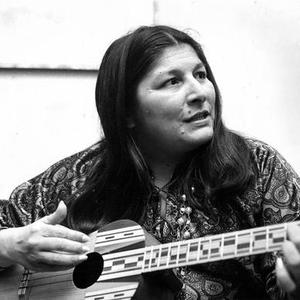 Mercedes Sosa (born 9 July 1935, died 3 October 2009 in Buenos Aires) was an Argentinean singer inmensely popular throughout Latin America. With her roots in argentinean folk music, she became one of the preeminent exponents of nueva trova (new song). Sosa is greatly admired for the depth and beauty of her contralto voice. She is nicknamed "La Negra" by her fans for her long, jet-black hair.Actually she is nicknamed "La Negra" because that's the way in Argentina we called affectously to dark skinned and hair people...

Sosa was born in Tucum?n, a northwestern province of Argentina, of mestizo descent from French and Amerindian (Quechuan) ancestry. In 1950, at age fifteen, she won a singing competition organized by a local radio station and was given a contract to perform for two months.

Sosa and her first husband Manuel Oscar Matus were key players in the mid-60s nueva canci?n movement (which was called nuevo cancionero in Argentina). Her first record was Canciones con Fundamento (Songs with Fundament), a collection of Argentinean folk songs.

In 1967, Sosa toured with great success the United States and Europe. In subsequent years, she performed and recorded extensively, broadening her repertoire to include material from throughout Latin America.

After the military dictatorship of Jorge Videla came to power, the atmosphere in Argentina grew increasingly oppressive. At a concert in La Plata (Buenos Aires) in 1979, Sosa was searched and arrested on stage, and the attending crowd was arrested. Banned in her own country, she moved to Paris and then to Madrid.

Sosa returned to Argentina in 1982, several months before the military regime collapsed as a result of the Falklands War, and gave a series of concerts at the Opera theater in Buenos Aires, where she invited many of her younger colleagues to share the stage. A double album of recordings from these performances became an instant best seller.

In the following years, Sosa continued to tour both in Argentina and abroad, performing in such venues as the Lincoln Center, Carnegie Hall and the Mogador in Par?s.

Sosa's repertoire continued to broaden, and she made recordings in various styles. She collaborated frequently with Argentine musicians such as Le?n Gieco, Charly Garc?a, Antonio Tarrag? Ros, Rodolfo Mederos and Fito P?ez, and other Latin American artists such as Milton Nascimento and Silvio Rodr?guez.

Sosa participated in a 2001 production of the Misa Criolla by Ariel Ram?rez.