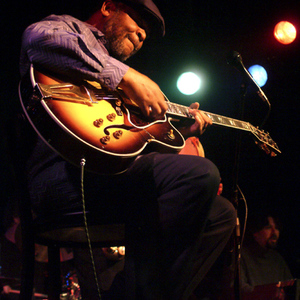 Melvin Sparks (born March 22, 1946) is an American soul jazz, hard bop and jazz blues guitarist most active in the 1960s and 1970s. Melvin Sparks is the Essential Guitar Player! He's The Master Of The Groove! The Acid-Jazz Pioneer! The Originator of Soul Jazz, Old School Acid Jazz & BarbecueFunk(FUNKJAZZ) Over the last thirty years he has played with some of Jazz's greatest musicians: David "Fathead" Newman, Lou Donaldson, Hank Crawford, Reuben Wilson and John Patton (are amongst the many).

Over the last thirty years he has played with some of Jazz's greatest musicians: David "Fathead" Newman, Lou Donaldson, Hank Crawford, Reuben Wilson and John Patton (are amongst the many). During the 1970s, Sparks backed up Lou Donaldson on the Funk-Jazz classics "Everything I Play Is Funky" and "Hot Dog".

Sparks recorded seven albums of his own and played on over 100 other albums. As a session man for Blue Note and Prestige Records, Sparks laid his signature guitar work on many other musician's albums without ever being in spotlight. It was during this time that Melvin defined the jazz-guitar sound of a generation.

Melvin Sparks is still a much sought-after studio player, both new and old talents seek him out now more than ever. He continues to perform with the greats of this genre such as Leon Spencer Jr., Mike Clark and Idris Mohammed and is now breaking out his legendary guitar wizardry with many younger bands and artists such as Galactic, The Greyboy Allstars, Karl Denson's Tiny Univers, Derek Trucks and Robert Walter's 20th Congress.

Melvin is geared up to show us all what he does better than anyone else. Groove hard and in the pocket. Melvin Sparks has perhaps the most inspiring and soul-energizing guitar chops on this planet or another. He is admired by many performers, and audiences old and young alike, but continues to be a hidden treasure for music fans worldwide. He is Soul-Jazzy and Funky to the core! .
Visit the Melvin Sparks Band at myspace.com

It Is What It Is

What You Hear Is What You Get