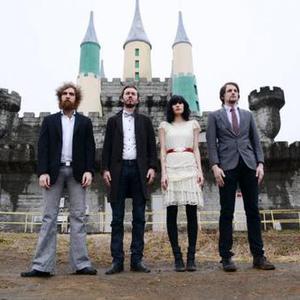 1. "Zeb Olsen recruited a bunch of cute art students, encouraged a noisy DIY punk ethic based on bands such as Pussy Galore and Beat Happening, and the cute but completely inexperienced art students took to their instruments. One misguided pop journalist known as David Nichols financed an album recording in 1989 and vinyl version of Kitty Finger was released and distributed by Waterfront Records. The band played some woeful and some inspiring shows in Sydney and imploded, as all the best bands do at one point.

Kathleen Hanna, friend and band budddy of Zeb and longtime fan of Matrimony, facilitated the re-release of Kitty Finger on the Kill Rock Stars label in 1997. Lead singer and guitarist Sybilla Visalli ended her own life for reasons unknown in 1993 or 1994 or sometime around then. Shit. I should remember. Here's singer guitarist Polly's take on our history: "Zeb Olsen & I started ?Matrimony' in the summer of 1988, gosh, almost 20 years ago! I remember we used to rehearse at the ?pie factory' off Palmer St. in Darlinghurst. Our first attempts at song writing were with a drum machine then Stuart, Zeb's brother played with us. A couple of rehearsals later my friends Sybilla, Michael & Dani joined ?Matrimony' was born. We really thought it was just for fun. At closer inspection it was a reaction to the men in bands all around us and how cool and untouchable they were to me as inner city rock stars. This was probably due to the heroin abuse and ?boy's club mentality' of the time. I suppose, dare I say ?Matrimony' was my 18 year old's take on feminism (Oh God)! Our gig's were disastrous. God knows how we got any. The first was at the ?Palace' with ?Lubricated Goat' and other's. I sang, oh fuck! I remember the motley crue of ?men in bands' (see above) egging us on and applauding us. Before every show Sybilla and I would get together work out what we were going to wear. That night in a wave of nerves we would innocently perform to a highly judgemental audience. Eventually we did get better and put out an album 'Kitty Finger'. I am immensely proud of this. It's like my long lost baby years. A golden era of Sydney that does not exist any more. By 1990 it was over. A ?rock & roll suicide' touched us in 1992 with Sybilla's death. I cried for a year. Love, Polly"" via Matrimony's bio at http://www.myspace.com/matrimony