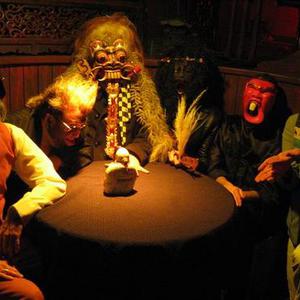 Like a reverse dark side of the New Age sound, on the Totem series Master Musicians of Bukkake perform ritualistic electric excursions into the outer and inner reaches. Relying more on the electric power of psyched guitars, analog synth chants, and exotic heavy percussion. Totem one echos with the delusions of a West Coast Death cult. Outer spaced Gamelan, dusty fuzz rock from celestial deserts, meditations of a deranged Krishna gathering, and the Blurry acoustic guitar majesty of The Cascade mountains all reveal themselves here in epic form On Totem One. Every sound and note played put to tape by a group with a singular purging purpose.