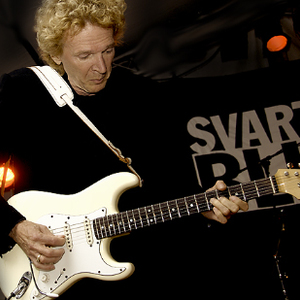 The musical roots of Mason Ruffner go back to the mid-sixties, when the lanky teenager from Ft. Worth, Texas fell victim to the supernatural guitar prowess of Jimi Hendrix and the lyrical genius of Bob Dylan. He began tracing the lineage of modern rock back to its post-war origins, digging the sounds of Jimmy Reed, B.B. King and Robert Johnson. No less influential were the works of French poets and novelists such as Rimbaud, Lautreamont, and Baudelaire.

In the late sixties, Mason tried his hand at modern rock and folk music, but the blues bug would not let him be. Eventually, blues singer Robery Ealey invited Mason to join his Five Careless Lovers, the house band at Ealey's own Bluebird Lounge in Ft. Worth. This was Mason's formative period as a guitarist and stage performer. Departing Ft.Worth, Mason spent time in California and New York before settling down in New Orleans in the late '70's.

After a few years of playing in bands on Bourbon St., Mason started his own band, The Blues Rockers. They landed a steady gig at Club 544 and played more than 200 live gigs a year, and in time, The Blues Rockers became one of the most popular bands in the Crescent City. They backed blues legends like Lightnin' Hopkins, John Lee Hooker, Memphis Slim, and counted Bruce Springsteen, Jimmy Page, Carlos Santana, and Stevie Ray Vaughan among the stars who dropped in to listen or sit in.

In 1985, Mason Ruffner was signed to CBS Records. His debut LP was produced by Rick Derringer and issued in October of that year. When Mason hit the road, headlining clubs and opening for Jimmy Page & The Firm's U.S. Tour, some of America's top critics started to notice. "What makes a record with so few surprises so satisfying?" asked Rolling Stone's David Gates, who continued, "Mostly it's the joy and the unselfconscious conviction with which Ruffner recreates and recombines the sounds he obviously loves." In the New York Times, Jon Preles said, "when it comes to rock-n-roll basics, Mason Ruffner never makes a falsestep."

In 1987 Ruffner released Gypsy Blood, which was produced by Dave Edmunds. A natural for the job, Edmunds complemented Ruffner perfectly. The spontaneous combustion of the sessions leaps from the grooves of Gypsy Blood. In support of Gypsy Blood, Mason toured with U2, Crosby, Stills, and Nash; Jimmy Page; and The Firm. The title track was included in the movie Steel Magnolias.

The dynamic originality and articulate fretwork of Ruffner's Evolution has captured the attention of superstar Carlos Santana, who has incorporated "Angel Love" off of Evolution into his live shows. Mason has made several guest appearances with Santana.

The latest CD, "You Can't Win", is on the Burnside Record Label and was recorded in Memphis. "You Can't Win" is a return to the roots, to the bluesy stuff that rocks.