Martha And The Muffins 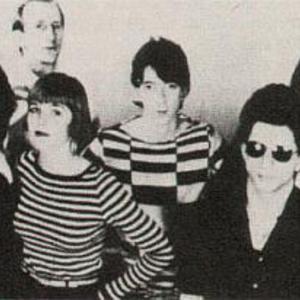 Martha and the Muffins were a Canadian new wave synth pop band in the 1970s and 1980s. The group's initial line-up came together in Toronto in 1977, when David Millar asked his fellow Ontario College of Art student Mark Gane to help him start a band. Millar recruited Martha Johnson to play keyboards; Johnson brought in a friend from high school, Carl Finkle, to play bass; and Gane's brother Tim Gane signed on as the drummer. With Millar and Mark Gane as guitarists, and Johnson as lead vocalist, this is the line up that debuted at an Ontario College of Art Hallowe'en party in October 1977.

The group's initial line-up came together in Toronto in 1977, when David Millar asked his fellow Ontario College of Art student Mark Gane to help him start a band. Millar recruited Martha Johnson to play keyboards; Johnson brought in a friend from high school, Carl Finkle, to play bass; and Gane's brother Tim Gane signed on as the drummer. With Millar and Mark Gane as guitarists, and Johnson as lead vocalist, this is the line up that debuted at an Ontario College of Art Hallowe'en party in October 1977.

They chose the name "Martha and the Muffins" to distance themselves from the aggressive names adopted by many punk bands of the era. According to Mark Gane: "We decided to use it as a temporary name until we could all agree on something better." The name ended up sticking for the next 7 years.
Saxophone player Andy Haas began performing with the band early 1978 (initially as a guest artist). Founding member Millar left the band shortly thereafter, preferring to work as the band's sound engineer for live shows. He was replaced by Martha Ladly, who had attended high school with the Ganes. She became the group's second keyboardist/vocalist named Martha, although Martha Johnson remained the group's primary lead singer.

In 1978, they released their first independent single, "Insect Love". This and a demo tape recorded in June 1978 quickly garnered them a recording deal with the DinDisc offshoot of Virgin Records.

This album gave Martha and the Muffins a major international hit single with "Echo Beach". Although the album didn't spawn any further hits, "Paint by Number Heart" did get some airplay on Canadian radio.

Later in 1980, the band released their second album, Trance And Dance, which was less successful and didn't give the band any hit singles. Also in 1980, Ladly left the band to pursue an art scholarship and would briefly join The Associates. Jean Wilson briefly replaced Ladly on tour in 1981, but never recorded with the group.

In 1981, bassist Finkle left the band, and was replaced by Jocelyne Lanois, the sister of then-unknown record producer Daniel Lanois. After Jocelyne introduced the band to her brother, they figured Daniel was an ideal candidate to produce their next LP. However, in order to utilize his services as a co-producer, Martha and the Muffins had to agree to Virgin Records' demand that if they were going to insist on working with an unknown producer, they would also have work with a lower album recording budget.

Martha and the Muffins' 1981 album This Is the Ice Age, produced by Daniel Lanois and the band, was recorded in Toronto and Hamilton, Ontario. More experimental than previous efforts, it also gained significant Canadian radio airplay from the singles "Women Around The World At Work" (a #24 hit in Canada) and "Swimming". However, despite critical acclaim, the album didn't spin off any hit singles internationally, and Virgin dropped the band from their roster.

The album's title track was another top 40 single in Canada, and for the Danseparc tour, the group was augmented by auxiliary players including guitarist Michael Brook. However, at the end of the tour Gane and Johnson (now a couple) announced that while they wanted to continue as a recording act, they also wanted to branch out in new directions by using new collaborators. In essence, Gane and Johnson decided that "M + M" was now Martha + Mark, along with a bevy of studio musicians and hired sidemen.

Their duo's 1984 album Mystery Walk was again co-produced by Daniel Lanois with Gane and Johnson, and featured a a large sticker crediting the band as "M + M o/k/a (once known as) Martha and The Muffins". Guest players included drummer Yogi Horton, bassist Tinker barfield, and the Brecker Brothers on horns.

Whatever their group name, the Mystery Walk album gave M + M/Martha and the Muffins their biggest hit in years with "Black Stations/White Stations", an anti-racist anthem whose first verse took radio stations to task for refusing to play a song about mixed-race romance, a story which Martha Johnson had heard related on the radio while driving in her car.

"Black Stations/White Stations" was a smash hit in Canada; in the United States it reached #2 on the dance music charts, but was ironically banned by many radio stations. "Cooling the Medium", the second single, was also a significant hit in Canada. In 1985 Johnson and Gane started work on their next album in Montreal, before heading to Bath, England to work with producer David Lord, resulting in the album The World is a Ball (1986). Although the lead single "Song in My Head" garnered them some airplay (and was another top 40 hit in Canada), the album sold poorly, and Gane and Johnson subsequently moved to England for a time.

Johnson and Gane took several years to record a follow-up to The World is a Ball. Recording started in Bath, where the couple had moved to in 1987, and continued in Toronto when they moved back to their home city in 1989.

In 1992, they contributed a cover of Joni Mitchell's "Shades of Scarlett Conquering" for the Mitchell tribute album Back to the Garden, and released the album Modern Lullaby. For this release, the duo revived the name "Martha and the Muffins", although the only other original Muffin to participate was Tim Gane (on "additional percussion"). The single "Rainbow Sign" was only a moderate hit, and Johnson and Gane essentially shut down the band and moved on to other projects for the next several years. Johnson and Gane's daughter Eve was also born in 1992.

In May 1999, Martha and the Muffins performed a live version of "Echo Beach" on the show Open Mike with Mike Bullard. In addition to Mark Gane and Martha Johnson, the band included Jocelyne Lanois, and another Gane brother, Nick.

In press coverage of these shows, Johnson stated that the band may record new material, but nothing definitive has currently been planned. However, one of their later songs, "Paradise", became popularized when the Canadian TV show Paradise Falls used the song as their closing credits theme.

In 2008, Cherry Red Records UK released the 25th Anniversary Edition of the Muffins' 1983 album 'Danseparc (Every Day It's Tomorrow)'. The album was digitally remastered by Peter J. Moore (producer of the Cowboy Junkies' 'Trinity Sessions' album), and produced by Daniel Lanois (U2, Peter Gabriel).

In October 2008, the band released their first new studio album in 16 years. It's entitled 'Delicate' and is mixed by David Botrill (Tool, King Crimson, Peter Gabriel). It's the Muffins' first album since 1992's 'Mordern Lullaby'.

The World Is A Ball (30Th Anniversary Edition)

Then Again: A Retrospective

Far Away In Time

Song In My Head (VLS)

The World Is A Ball