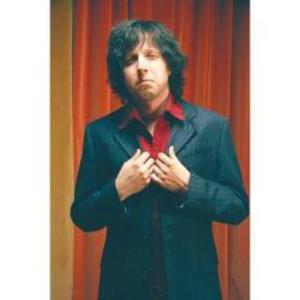 Mallman began playing the piano at 3 years old. ?I found a severe magnetism in pounding my fists on the thing.? His live performances are an unforgettable experience; approaching the keyboard like an electric guitar, lyrics like an existentialist writer, and the stage like a circus performer. In recent years, he's has toured across America opening for such diverse acts as Guided by Voices, Beth Orton, Cat Power, Donovan, Tegan and Sara, Ozomatli, Everlast, Exene Cervenka, Howie Day, Cracker, and Chuck Prophet amongst many others.

DOWNLOAD HIS FREE BEST OF COLLECTION for a limited time at www.markmallman.com. While media outlets from Public Radio International to the LA Weekly have herald Mallman as the second coming of arena rock, this leather booted songwriter remains a man out of time, by his own unabashed design. "On one level it's deconstructivism, but on the other it's simply parlor tricks. I guess they used to call it ?showbiz'?, he says.

The former movie columnist, holds a bachelor of fine arts degree from the Minneapolis College of Art and Design, is currently writing a novel based loosely around Kafka's ?the Metamorphosis? and his 10 years of touring America and Europe. Recently, he's been moonlighting as a composer on major motion picture trailers such as 10000bc, Prom Night, and Vacancy. However, Mark is most widely known for his record setting ?Marathon 2?, a 52.4 hour single pop song performed alongside a rotating backing band of 100 some odd musicians.

Badman Recording Company's 2006 and 2004 releases both garnered killer reviews as well as widespread airplay on college and public radio. Today, he boasts a star on the wall of Minneapolis' world famous "First Avenue Nightclub", as well as having penned one of the ?greatest? songs in Minnesota History (City Pages Magazine) alongside Prince and the Replacements. Whether headlining in a hazy nightclub or opening a show in a theater of thousands, Mark Mallman has continually and consistently proven himself as a showman, songwriter, and musician of the highest caliber.

who's gonna save you now?