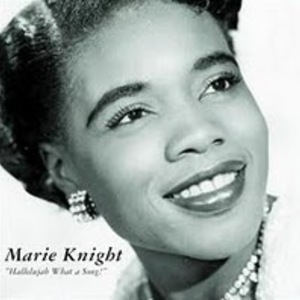 Marie Knight's vocal talents were recognized early on. When she was five years old, Marie?who was born in Sanford, Florida, but raised in Newark, New Jersey?sang the gospel number "Doing All the Good We Can" at her parents' church, where the congregants marveled at her poise. A member of the youth choir, she was soon elevated to soloist and taught herself to play piano. "I used to go to the church in the daytime and just hit one note at a time, to hear that sound," she recalled. "It was a joy to me, to put those notes together on the piano, just one key at a time."

That joy soon became a professional calling for Marie, who by her early twenties had gained experience touring the national gospel circuit with evangelist Frances Robinson; she even recorded a few early sides with the quartet The Sunset Four. In 1946, she met Sister Rosetta Tharpe, the nationally famous gospel singer-guitarist, who recognized something special in Marie's compelling contralto and her elegant stage presence. The two became gospel's preeminent duo of the 1940s, recording hits for Decca Records, including "Didn't It Rain," "Up Above My Head," and the gorgeous "Beams of Heaven." By the late 1940s, Marie and Rosetta had split to pursue separate musical projects?Marie to do solo gospel work on Decca.

The two women reunited frequently on stage during the 1950s, however. In addition to singing before thousands of gospel fans in Washington, DC in 1950, and touring with up-and-coming gospel vocalist Wynona Carr in 1954, Marie and Rosetta impressed the critics with their sophisticated performances at top New York City jazz clubs in 1955.

In the 1960s, Marie cultivated a rhythm-and-blues career, touring with the likes of Brooke Benton, the Drifters, and Clyde McPhatter. After a hiatus, she re-emerged in the mid-1970s to record gospel music; today, Marie Knight is a minister at Gates of Prayer Church in New York, founded by the late Dolly Lewis.

In January 2002, on a cold, bright Saturday morning, Marie entered a recording studio to pay tribute to her old singing partner, Rosetta Tharpe, doing a solo version of their old hit "Didn't It Rain." [listen the fruits of that session on Shout, Sister, Shout! (MC-0050).] That session?and Marie's continuing vitality as a singer and performer?led to her present collaboration with producer Mark Carpentieri.

Her voice has changed since the earliest days of youth recitals in Newark, but Marie Knight's gift?the one recognized early on by her church?remains undiminished by time.

"she's an outstanding singer and the material is a perfect fit. The songs of Reverend Davis are as vibrant now as they were when he was alive.
Dick Waterman