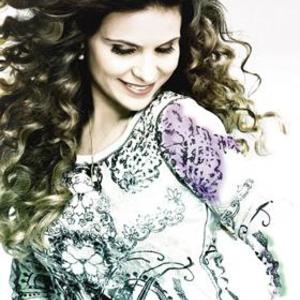 Aline Barros built over her 29 years, a ministry which is respected, robust and recognized on the national and international scenes. The charisma, the commitment with God and the anointing of God was revealed in the life of the young minister of praise, projecting her ministry beyond the church and gaining prominence in the secular media. Aline is one of the best-known singers in Brazil and abroad as one of the most beautiful voices of the Christian sector. She is married to Gilmar Santos, a former football player who gave up his career to embrace the ministry of the word.

She is the mother of Nicolas, age 3, and is schooled in Marine Biology, the UFRJ. Aline has participated in programs of Xuxa, Hebe Camargo, Luciana Gimenez, Gilberto Barros, Raul Gil, Eliana, Carla Perez, among others, here in Brazil.

Always surrounded by the support of the family, she began to sing at 2 years of age, drawing the attention of her mother, the shepherdess Sandra, and her father, the pastor Ronaldo Barros. It did not take long for her parents to realize the musical talent of the girl, who at age 9, followed the father of Praise and the Ministry of Community of Vila da Penha, in the north of Rio de Janeiro. Soon after, Aline became part of the praise team, participating in some recordings. And at the age of 14, Aline recorded the first solo song "Thy Word", the CD of the Community. And the result was surprising: 45 days in the parade of successes of the evangelical radio in Rio de Janeiro. Two years later, the song "Dedication" forever sealed in time the name of Aline in gospel music. Success throughout Brazil, was nine months in the first place in implementing the radios as well as being sung by churches of every country.

After having recorded 12 albums, in March 2004, Aline signed a contract with MK Music records that, according to the singer, represented a new phase in her ministry. Seven months later, she became the first Brazilian gospel singer to receive a Grammy Latino, in the category Best Album of Christian music. Then, she launched her first CD by MK, Sound of worshipers, who already Disc Double Platinum, for more than 250 thousand samples sold. The album, which is produced by Vieira and Rogerio Kleber Lucas, is the first singer with the unpublished songs live and was recorded in the International Community of South Zone, where Aline and her husband are members. "This CD is a new Aline. Aline is a worshiper who ministers with authority on stage. Aline is bold, which shows that she really understands the seriousness and value of a life for Jesus," shares the songs. The CD was nominated for the Grammy Latino 2005, in the same category in which Aline won a year earlier.

In 2005, she launched the DVD sound to worship, with all the songs on the CD and a medley with the songs "pours" (Fernandinho), "Does it rain" (Michael Farron) / "Dedication" (Anderson and Marcelo Matos de Matos) and "Shout to the Lord" (Hillsong). The DVD is already working for Gold and has demonstrated the impact of this new phase of the singer. At the end of that year, the CD was launched Aline Barros and Cia, an album that turned up a special project for children which was created and directed by Aline. The songs, with content teaching and outreach, is intended to present the message of the Gospel in a contextualized and fun manner. The production is also by Rogerio Vieira, and has compositions of names with Solange and Beno Cesar and Gilmar Santos. Besides the songs, children will have fun with the characters that will be worked on the DVD that will be written soon.