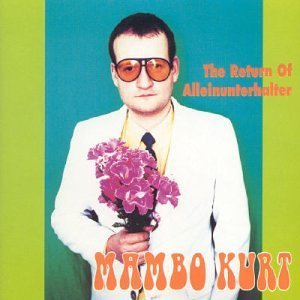 Mambo Kurt (born Rainer Limpinsel; 11 April 1967 in Hagen) is a German artist who does covers of various mainstream and classical/modern rock hits. More than just a comedy and novelty act, Mambo has played The Wacken Open Air festival and provided music for a German television show called Verona's World. But when he plays the covers, he does them a little different from the usual type of song, as he plays a Hammond Organ and changes the style of the song into a Bossa Nova, Samba or Polka style song.

He also gets his nearly 80 year old Hammond organ teacher Heidi Schultz to sing covers of The Sex Pistols Anarchy In The UK and The Rolling Stone's Sympathy For The Devil on his latest offering, Sun Of A Beach, a live album. Despite not been known all over the world, over the years he has earned himself a lot of fans over his bizarre takes on the songs, most notably Clawfinger and Rammstein (whom he has both covered on his albums).