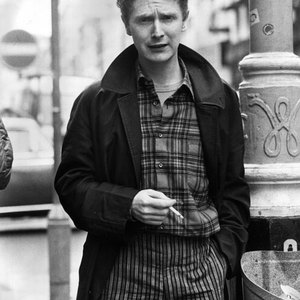 In 1975, after a failed stint at managing & relaunching the image of the notoriously hard living and chaotic band The New York Dolls, Malcolm nurtured the formation of one of the most infamous punk bands in history, The Sex Pistols. He became their manager, and controlled their contracts, as well as most importantly to him, their image in the media. The venture ended in a disastrous US tour, and a film called "The Great Rock And Roll Swindle" that featured McLaren, and glorified his untraditional Situationist PR approach and manipulative Svengali-esque role in the band's career.

In the '80s, after the Sex Pistols had long broken up, Malcolm became the manager of another band, Adam and The Ants which veered away from punk's coarse format via new romantic pirate garb and poly rhythmic African style drumming. When Adam Ant rebelled and left the band, Malcolm repackaged the musicians with a 14 year old Anglo/Burmese girl named Annabella Lwin to form the band Bow Wow Wow. He soon used his headline making skills to propel the band and their underage lead singer to the top of the charts with a nude album cover scandal.

In the early 1980's, Malcolm began producing his own records, beginning with the hits "Buffalo Gals" and "Double Dutch" from the groundbreaking 1983 album "Duck Walk" which used NYC hip hoppers and scratch DJ's The World Famous Supreme Team, as its foundation. Future members of Art of Noise performed on, produced, and/or jointly composed various tracks. He next turned to opera, masterminding a pop adaptation of "Madam Butterfly" on the album "Fans" using an assortment of female vocalists, and skilled musician Robby Kilgore on the tracks.

McLaren has released numerous other albums and tracks since, including contributions to the movie soundtracks of Carry On Columbus, and Kill Bill 2, but his musical career peaked with his 1980's works. McLaren's original "Double Dutch" era material has since been reappropriated and sampled by sucessful artists including Mariah Carey, Eminem, Amerie and De La Soul.

In his later years, McLaren occasionally contributed to newspapers and magazines, directed and produced films and appeared on British reality television programmes. He died on the morning of 8 April 2010, following a battle with cancer.

Buffalo Gals: Back To Skool

World Famous Supreme Team Show Round The Outside!

Waltz Darling (With The Bootzilla Orchestra)