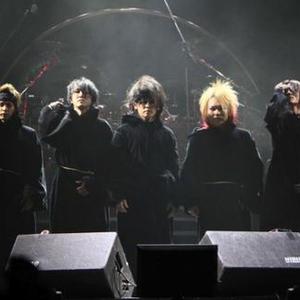 LUNA SEA are a rock band formed in Kanagawa, Japan in 1989. The band was founded by bassist Jun "J" Onose and rhythm guitarist Kiyonobu "INORAN" Inoue when they were in high school, and was originally known as LUNACY. When the senior members graduated from school in 1989, LUNACY recruited lead guitarist and violinist Yasuhiro "SUGIZO" Sugihara, drummer ?? (SHINYA, born Shinya Yamada), and vocalist RYUICHI (Ryuichi Kawamura, then called "Rayla"), a lineup that has remained the same since then.

Upon the release of their debut album LUNA SEA, the band changed their name from LUNACY to LUNA SEA.

LUNA SEA's sound is firmly based in 80s hard rock with a versatile progressive approach to songwriting. With mixed elements of punk, metal, and some pop, they form hard, slow, or fast tunes, as well as ballads, all with a mysterious atmosphere. Their softer side, with violin playing, also proves equally as strong.

LUNA SEA, due to early use of makeup and costumes, and their widespread popularity, is considered one of the biggest influential bands in the visual kei movement. Throughout the mid 90s, they used significantly less makeup, and after a one-year break in 1998, they came back with a more progressive rock style and toned down their onstage attire. When they went on an indefinite hiatus in 2000, they left a big influence on the Japanese rock scene.

LUNA SEA achieved its breakthrough success with a sold-out tour in 1991, which helped them to get a contract with MCA, and with the release of their second album IMAGE which recached #9 on the charts. After moving to Universal Music Group in 1998 the band released their best-selling album, SHINE, with an estimated 902,310 copies sold in one year in Japan alone, although this is less than their compilation album SINGLES which managed to sell over one million in Japan. Throughout their career, LUNA SEA released seven studio albums, one live album, seven VHS/DVD releases, and fourteen singles, and sold over eight million records in Japan alone.

On August 25, 2010, the day of a full moon, it was announced that they would hold an urgent press conference on August 31 in Hong Kong, where they previously announced the end of their activities in 2000. During the press conference, the band confirmed a reunion and announced their first tour in ten years, new songs, and added that there will be even more news with time. The world tour, named LUNA SEA 20th ANNIVERSARY WORLD TOUR REBOOT -to the New Moon- began on November 27 in Germany, and continued with performances in the United States, Hong Kong, Taiwan, and ended on December 31 in Japan, the last of a two-day performance in Kobe.

In response to the 2011 T?hoku earthquake and tsunami that occured March 11, LUNA SEA announced that they would release their first new song in 10 years. "Promise" was released on April 9 exclusively on Amazon websites as a digital download, with all proceeds donated to the Japanese Red Cross to aid the victims. Their December 4, 2010 concert in Los Angeles was filmed in 3D, and it was released as a live album and video. Both titled LUNA SEA 3D IN LOS ANGELES, the album was released on June 1, while the video was shown in theaters nationwide in Japan on June 4. The band streamed a live press conference, at the movie's premier at Toho Cinemas Roppongi Hills, through Ustream.tv on May 29. There, they announced a charity concert titled LUNA SEA For JAPAN A Promise to The Brave at the 30,000 seat Saitama Super Arena on October 22. The concert will be broadcast life on WOWOW, and all proceeds from the event will go to the Japanese Red Cross for the victims of the T?hoku earthquake and tsunami. Tickets for the show went on sale on August 14 and sold out in five minutes.

Another side of Singles II