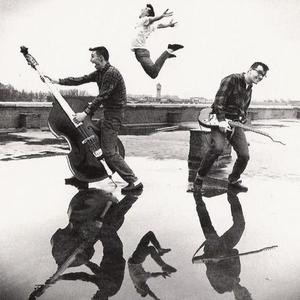 The Long Tall Texans are a psychobilly/rockabilly band from Brighton, UK. The current line-up is: Mark (vocals/slap bass), Theo (drums), Garry (guitar) and Brother Matthew (guitar). Roy Williams of Nervous Records remembers well when our heroes were trying to get signed, in typical fuzzy rockabilly folklore style the details are just that, fuzzy, but he does recall a piss-up of monumental proportions at a gig downstairs at the Clarendon organised by a woman unknown who promised free booze for interested parties.

Roy Williams of Nervous Records remembers well when our heroes were trying to get signed, in typical fuzzy rockabilly folklore style the details are just that, fuzzy, but he does recall a piss-up of monumental proportions at a gig downstairs at the Clarendon organised by a woman unknown who promised free booze for interested parties. A phone call to Ray Frensham of Northwood records later and the deadly duo were off ?to have a laugh and milk the free booze for all they were worth'. Mission accomplished Roy does not remember getting home. He does remember with glee correcting the spelling on schoolteacher Mark Ds letter to him, the wise old sage!

Not long after and all things were rockin along quite nicely in the Texans camp with their growing legion of fans treated to the release of Sodbusters, a cracker of an album, hard to pigeon hole not psychobilly with not a hint of a graveyard, Zombie or Vampire not rockabilly, but a slap bass driven party album with what would become their trademark mix of all sorts of styles. A few other tracks appeared on Raucous and Nervous compilations to keep the Rockin underground hungry for more. Anyway it's getting a bit serious again.

Hard touring with the fan base building and the Album selling soon followed hot on the heels by new releases Los Me Boleros which included all time Texans favourite ?Indians' and live blaster Five Beans In the Wheel. Saturnalia was released on Picture disc to wide acclaim and included classic Texans tunes Bloody, Cairo and No Tomorrow. One of the Texans great talents was to cover songs and make them totally their own, the other was to sing songs with pretty miserable lyrics like Bloody and make them sound happy and make you jump about even though the song was basically about getting dumped by your bird and you knew it.

Such was their live reputation the Long Tall ones soon found themselves on the end of the Jettisounds lenses where their show at the Night Of The Long Knives was captured in all it's beer swilled glory and titled ?Blood Sweat and Beers' for all that couldn't make it or weren't born yet could see what they missed.

In the meantime the Texans had been embraced by the Psychobilly masses of Europe regularly trundling off with their van car or any other mode of transport they could get their hands on to play gigs the length and breadth of the continent to a fanatical following.

Singing To The Moon was another landmark direction for the Texans, a sharp move towards or rather away from what people expected, the Psychos listened, blinked, listened again and loved it. The title track a cool as cucumber echo laden reggae inspired sing along together with a dub version that sat just as well with the jazzy ?Klub Foot Shuffle' and the real life tragedy based rocker ?Suicide at the Seaside' Things looked as if they could be going even further for the Texans when Mark Denman ?Boggles' left the band, at least in a live performance role. It seemed for a while as if the wheels had come off of the bandwagon just when it was gaining speed. The band played at the Rumble that year with Gus (?) who was later replaced by Cellmate Leicester Kev, Steve(?) and then Doug Shepard formerly of the Rattlers.

With all the line-up changes that were going on with Mark and Theo trying to replace a mate that had been with them since day one you could have quite understood that things would have gone pear shaped and that the heyday of the Long Tall Texans was over. Guess again, they had yet more surprises up their sleeve. One gig I was at the curtains went back and the cry went up, ?Who the fuck is the hippy?!' Standing stage right with hair down to his arse and black trousers skin tight on legs that made Carew look stocky stood new Sax man Paul Mumford. The Texans with a sax? Though there had been guest instruments on recorded stuff but full time in the line-up playing old Texans favourites? It would never work, but it did.

Aces and Eights followed, Sax to the fore and once again a mix of styles and even a fender bass on what turned out to be one of the favourite tracks on the Album ?lip Service'. The sax reworking of big time favourite ?Bloody' was an unthinkable improvement, with even a Levellers style track with Innocent Look and a guest guitarist laying down a bit of metal on the closing track. This album launched the band into the stratosphere, well a tour of Japan. That was the furthest they went on tour but the ones closer to home produced some cracking stories. Ready?

After too much booze as Theo remembers a free for all but good-natured scrap on the car deck of a cross channel ferry with The Klingonz (from Mars so what they were doing on the ferry god only knows). Other sources remembered that the police were waiting with good descriptions of the culprits, Klingonz are let's say hard to miss and were apprehended while the more soberly haircutted Texans slipped through the net.

Another story was when the Texans had agreed to give a mate of Chuck Flintstone a lift home from Germany at some hardship to themselves, all the band plus hitchhiker were squeezed in a Ford Capri with Drums on laps and Double Bass on the roof. All was going well until the French/Belgian border where some over keen Customs officials on the French side decide to stop the intrepid carload. Almost as they opened the boot the assorted merchandise started to fall about. On noticing the rather nifty Geo Parkin designed Ts the customs guy made it known to Carew he would like one, faced with the prospect of having to load the car again after a full scale search he willing agreed, and handed over a shirt, only to be told ?Non' as the customs fella gestured to his three amigos who had appeared as if by magic at the roadside. They all got one, the last view from the Capri's wing mirror was the four well chuffed Frenchmen holding up their new Long Tall Texans Ts for size.

The other thing the Texans and Carew especially are renowned for is the ability to sleep anywhere. At one gig in Devon they were playing a birthday party where the accommodation was the promoters two bedroom flat. Support was The Gazmen and a local two-piece with a t-chest bass and mullets, with even more mullet biker hangers on. At the after gig party invaded by the mullets and bikers who juggled their cider bottles for kix Carew was happily curled up on the kitchen floor along with Theo who had found some curtains to sleep in, trademark smiles on faces, oblivious.

And that just about sums up the story so far for the Texans, as at home playing to 2000 people at a festival as in a beer soaked boozer in the middle of nowhere as long as it is fun and with them it always is. The sight of Mark Carew slapping that Bass with a smile as big as Brighton on his face is one that anyone lucky enough to witness will cherish for a very long time.

The Devil Made Us Do It