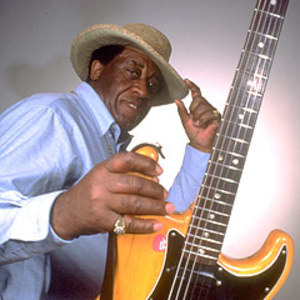 For much too long, the legend of Long John Hunter has largely been a local one, limited to the bordertown region between El Paso, Texas and Juarez, Mexico. That's where the guitarist reigned for 13 years (beginning in 1957) at Juarez's infamous Lobby Bar. Its riotous, often brawling clientele included locals, cowboys, soldiers from nearby Fort Bliss, frat boys, and every sort of troublemaking tourist in between. Hunter kept 'em all entertained with his outrageous showmanship and slashing guitar riffs.

The Louisiana native got a late start on his musical career. When he was 22 and toiling away in a Beaumont, TX box factory, he attended a B.B. King show and was instantly transfixed. The next day, he bought a guitar. A year later, he was starring at the same bar that B.B. had headlined.

Hunter's 1954 debut single for Don Robey's Houston-based Duke label, "She Used to Be My Woman"/"Crazy Baby," preceded his move to El Paso in 1957. Along the way, Phillip Walker and Lonnie Brooks both picked up on his licks. But Hunter's recording output was slim ? a few hot but obscure singles waxed from 1961 to 1963 for the tiny Yucca logo out of Alamogordo, NM (standouts include "El Paso Rock," "Midnight Stroll," and "Border Town Blues"). Perhaps he was just too busy ? he held court at the Lobby seven nights a week from sundown to sunup.

Fortunately, Hunter's reputation is finally outgrowing the Lone Star state. His 1992 set for the now-shuttered Spindletop imprint, Ride With Me, got the ball rolling. Now, his 1996 disc for Alligator, Border Town Legend, should expose this Texas blues great to a far wider (if not wilder) audience than ever before.

Looking For A Party

One Foot In Texas (With Tom 'Blues Man' Hunter)

Swinging From The Rafters