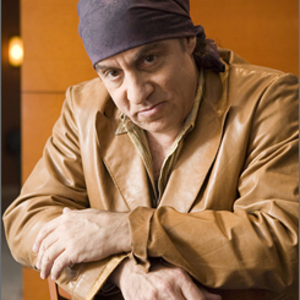 Litte Steven is one of the stage names of Steve van Zandt (born November 22, 1950), an American musician, songwriter, arranger, record producer, actor, and radio disc jockey best known as a member of Bruce Springsteen & The E Street Band, in which he plays guitar and mandolin, and as an actor in the television drama The Sopranos, in which he played Silvio Dante. van Zandt was born as Steven Lento in Winthrop, Massachusetts.

van Zandt was born as Steven Lento in Winthrop, Massachusetts. His mother, Mary Lento, remarried when he was young and Steven took the last name of his stepfather, William Van Zandt. The family moved from Massachusetts to Middletown Township, New Jersey when he was seven.

Van Zandt subsequently became a songwriter and producer for fellow Jersey shore act Southside Johnny & The Asbury Jukes in the mid- to late-1970s, penning their signature song "I Don't Wanna Go Home", co-writing other songs for them with Springsteen, and producing their most-acclaimed record, Hearts of Stone. As such, Van Zandt became a key contributor to the Jersey Shore sound. Van Zandt then went on to share production credits on the classic Springsteen albums Darkness on the Edge of Town, The River, and Born in the U.S.A..

Van Zandt has produced a number of other records, including an uncredited effort on the Iron City Houserockers' Have A Good Time (But Get Out Alive). Less successful was his work on Lone Justice's second album Shelter, which was a career-ending flop for the Los Angeles cowpunk band.

Van Zandt officially left the E Street Band in 1984 (Springsteen's song "Bobby Jean" is said to be inspired by the split) and has been involved in numerous solo musical projects and collaborations since then, ranging from soul music to hard rock to world music. In particular, he released four albums in the 1980s and one in 1999, sometimes fronting an on-and-off group known as Little Steven and the Disciples of Soul. Van Zandt has written that these albums are each elements in a five-part concept cycle. The first of them, 1982's white soul Men Without Women, earned the most critical praise (Jay Cocks of TIME magazine dubbed it one of the ten best albums of the year), while its follow-up, 1984's Voice of America, did the best on the U.S. albums chart, although none of them were much of a commercial success. With Voice of America, his music became explicitly political, with the central theme being opposition to Ronald Reagan-era American foreign policy.

Continuing his involvement in issues of the day, in 1985 he created the music-industry activist group Artists United Against Apartheid as an action against the Sun City resort in South Africa. Forty-nine top recording artists, including Springsteen, U2, Bob Dylan and Run DMC, collaborated on a song called "Sun City" in which they pledged they would never perform at the resort. The effort was modestly successful. In 1987 he released the album Freedom - No Compromise, which continued the political messaging in an even more strident fashion. Some U.S. appearances in that year as opening act for U2's arena-and-stadium Joshua Tree Tour continued in the same vein ? Oliver North was labelled a "criminal motherfucker" ? but were not well-received by audiences, who found the sound overbearing and the performances lacking musicality. Both the record and his concerts were more popular in Europe, however. Little Steven's fourth album, 1989's Revolution, attracted little attention.