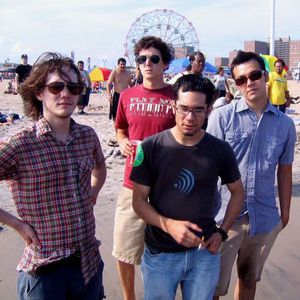 On their second full-length release "Tighten the Noose", Omaha, NE indie rockers Little Brazil make a bold statement as a titan force of pop rock. Their sophomore effort showcases a band taking a confident step in their progression as artists who have honed their songwriting craft while mining the deeper and darker regions of relationships. Lead singer Landon Hedges writes with his heart on his sleeve yielding a compelling lyrical approach. Hedges isn't afraid to sing about the dark corners of love and he knows how to pull you in with inviting melodies and anthemic hooks.

Little Brazil made a short trip west to Lincoln, NE to record the last record ever made at Presto! Studio with A.J. Mogis (The Faint, Cursive, Rilo Kiley) at the helm. Mogis impressive production abilities capture a band climbing to their peak while successfully capping an era to a legendary studio that lent itself to records by Rilo Kiley, Bright Eyes, Cursive and more. Little Brazil grabs the torch from its forbearers and carries it proudly with "Tighten the Noose". From the fist-pumping anthem of "Last Night" to the confessional "On The Ropes", Hedges sincere delivery and infectious hooks will rope you in. "Tighten the Noose" should find a happy home in the collections of fans that appreciate bands like The Shins, Death Cab for Cutie, Rilo Kiley or Cursive.

Hedges and bassist Danny Maxwell formed Little Brazil in 2002 after Hedges played in the Connor Oberst offshoot Desaparacidos and the Tim Kasher fronted The Good Life. Drummer Oliver Morgan and lead guitarist Greg Edds were added shortly after their debut record "You and Me" was released in February 2005. Little Brazil has toured relentlessly opening for Tegan & Sara, Statistics, Cursive and others.