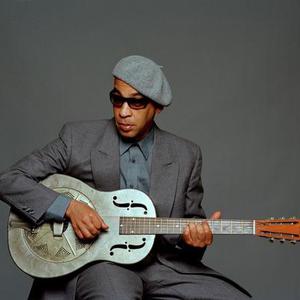 Born Bernard Alexander on 1 September 1949, Dayton, Ohio, Skip McDonald learned to play the blues on his father's guitar from the age of 8, although by the time he was 12 years old he had opted to perform doo-wop. But from picking up a guitar as a child, and returning to his roots with Little Axe, there has been a long twisting road. McDonald, along with bassplayer Doug Wimbish and drummer Keith LeBlanc formed the house band for the pioneering rap label Sugar Hill, providing the music for some of the most seminal records of the era by Grandmaster Flash, Afrika Bambaata, Force M.

But from picking up a guitar as a child, and returning to his roots with Little Axe, there has been a long twisting road. McDonald, along with bassplayer Doug Wimbish and drummer Keith LeBlanc formed the house band for the pioneering rap label Sugar Hill, providing the music for some of the most seminal records of the era by Grandmaster Flash, Afrika Bambaata, Force M.D. and others. From there he worked closely with Adrian Sherwood on many of projects for the On-U Sound label, as well as spearheading the band Tackhead and working with Living Colour.

But first, back to Dayton, Ohio.

Having completed his high school education Skip left Dayton with a band called the Ohio Hustlers, which broke up not long after relocating to New York City. His first professional work as a musician began when he formed the Entertainers who toured the east coast through to the mid-70s.

He moved on to Hartford, Connecticut, and there's when he met Doug Wimbish, who played in a band called Wood, Brass & Steel. Wood, Brass & Steel recorded a selftitled album for All Platinum Records, the label of Sylvia and Joe Robinson, in 1976. Skip and Doug played a lot of music together, in clubs and colleges around New York, New Jersey, Connecticut and Massachusetts.

In 1979, three years after the Wood, Brass & Steel album, Skip and Doug teamed up with drummer Keith LeBlanc and they became the house band for Sugarhill Records, the Robinson's new label. The trio played on some of the earliest rap hits such as The Message and White Lines (Don't Do It) with Grandmaster Flash.

While they worked at Sugar Hill, LeBlanc also freelanced at Tommy Boy Records where he first met Adrian Sherwood. LeBlanc introduced his colleagues to Sherwood and the trio were persuaded to relocate in London. Upon their entry into the On-U Sound fold, the group formed a production team and, again, a house band, this time for On-U. The three participated in dozens of records on Sherwood's label.

The partnership developed and metamorphosed into a fully-fledged band, Tackhead. Though good working relationships remain to this day, the dispersion of Tackhead in the early 1990s saw Keith and Doug pursue more of their own projects and play less often togther.

For Skip the time since has seen him work ever more closely with Sherwood, both on his own projects and as a musician or guest vocalist on many other of Adrian's On-U Sound productions - such as by Junior Delgado, Bim Sherman, Dub Syndicate and African Head Charge, sometimes along side Keith and /or Doug.

Skip has been the prime mover behind Little Axe since around 1992. Under a name inspired by Bob Marley's Small Axe and gospel singer Willmer 'Little Ax' Broadnax, the debut album Wolf That House Built was a personal take on blues and dub, and was released to critical acclaim in 1994. This had followed a partial release in Japan compiled in a slightly different form and with a different title (Never Turn Back) the previous year. The second Little Axe album, Slow Fuse, was also well received. Both albums featured tabla player Talvin Singh, for Slow Fuse the gifted voices of Kevin Gibbs and Sas Bell were added.

Then it remained silent for far too long. In 2002 Skip's third Little Axe album Hard Grind became the first release for four years on Sherwood's revived and re-launched On-U Sound label with a mixture of raw blues and reggae. While Hard Grind no doubt will also draw comparisons to Moby's Play, it was Skip who pioneered the fusion of blues and electronic music with Little Axe.

In 2006 Skip McDonald finished the fifth Little Axe album, Stone Cold Ohio, after Champagne and Grits (2004), the second record released on Peter Gabriel's Real World Records. Skip still has got the blues but this time the emphasis is on the gospel, another of Skip's old loves. The production and mixing was done Adrian Sherwood; 'gospel dub' like you never heard before.

If You Want Loyalty Buy A Dog

Bought For A Dollar, Sold For A Dime

The Wolf That House Built