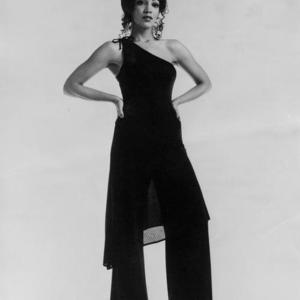 Linda Clifford (born 14 June 1948, New York City, New York) is an American R&B, Disco and House music singer and actress who scored hits in the 1970s, 1980s, 1990s into the new millennium. Clifford is also a former Miss New York State, and fronted a jazz music trio before switching to R&B. After winning her title, Clifford started working as an actress, receiving minor roles in major films like The Boston Strangler with Tony Curtis and Henry Ford, Coogan's Bluff with Clint Eastwood and Sweet Charity with Shirley MacLaine.

Clifford is also a former Miss New York State, and fronted a jazz music trio before switching to R&B. After winning her title, Clifford started working as an actress, receiving minor roles in major films like The Boston Strangler with Tony Curtis and Henry Ford, Coogan's Bluff with Clint Eastwood and Sweet Charity with Shirley MacLaine.

Unsatisfied with her roles, Clifford decided to concentrate on her singing career, and performed in night clubs with the Jericho Jazz Singers, before forming her own group Linda & The Trade Winds. In 1973 she was signed to Paramount Records and her first single, "(It's Gonna Be) A Long Long Winter" became a minor hit on the R&B charts in the winter of 1974.

By the mid-70's Curtis Mayfield signed Clifford to his Curtom Records label. The first single off her self-titled album was "From Now On" which again became a minor hit on the R&B charts. Her follow-up album, [album]If My Friends Could See Me Now[/album] produced two of Clifford's biggest hits, putting her on the music map. The first, "Runaway Love" became an R&B hit peaking at #3 for two weeks. The second, the title track, became a hit on the Disco chart peaking at #1 for five weeks.

The following year, she released her third album, 1979's Let Me Be Your Woman. It yielded a Disco version of Simon & Garfunkel's hit "Bridge Over Troubled Water" which became her first Top 40 pop hit on the Billboard Hot 100. The album was also available in a two-record form with extended versions and included another R & B hit, "Don't Give It Up", which had a similar feel to "Runaway Love". These two albums had been produced and arranged by Gil Askey, a music industry veteran whose track record had included arranging duties for major acts at Motown and acting as musical director for Diana Ross, The Four Tops and The Temptations. Askey had written "[track artist=Linda Clifford]Runaway Love" and "Don't Give It Up", the latter with Linda.

Clifford appeared on The Midnight Special (Episode dated March 16, 1979). Then followed by "Here's My Love" (1979) and a duet with Curtis Mayfield, "Between You and Me, Baby" (summer 1979). Eventually, Mayfield and Clifford released an album of duets in 1980, The Right Combination. In 1980, Clifford was asked to produce a single for the upcoming film, Fame. The result was the Top 40 hit "Red Light". It became her second number-one disco hit. Her next and final album with RSO, I'm Yours, was produced by Isaac Hayes and gave her her third #1 Disco hit "Shoot Your Best Shot" which was number-one on the U.S. Dance Charts for 4 weeks.

In 1981, Clifford her Curtom contract switched to Capitol Records and she released "Don't Come Crying to Me". It peaked at number-one for three consecutive weeks on the disco charts. Despite the success of the single, the album I'll Keep On Loving You sold poorly, and her contract was not renewed. However the album did include "All the Man That I Need" which would go on to be a huge hit for Whitney Houston almost a decade later.

Clifford was signed to local label Red Label Records and released Sneakin' Out in 1984. The release yielded a couple of minor dance and R&B hits, including the title track. MY HEART'S ON FIRE, in 1985 would be Clifford's last full length album. It featured the top ten dance hit "The Heat In Me".

After her initial record contract was not renewed, Clifford began to write jingles for such products as Tropicana, Maybelline, McDonald's, Miller Lite, Michelob Lite, Oldsmobile and Pontiac.

She also provided the theme songs for The Phil Donahue Show and the police drama Chicago Story and became a host to one of the first home-shopping TV shows Home Shop Chicago. Clifford also continued to perform in local clubs and at special events.

On June 23rd 2008 Glitter Records released a new house mix of the track "How Long" with mixes by Paul Goodyear.

My Heart's On Fire (Vinyl)

Let Me Be Your Woman (Vinyl)

If My Friends Could See Me Now (Vinyl)