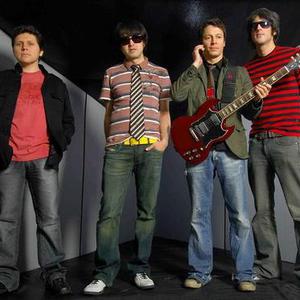 1.Peruvian Band
L?bido :
A peruvian rock band formed in 1996. Band members are Salim Vera (vocals, guitars), Antonio Jauregui (bass), Manolo Hidalgo (lead guitar) Jeffry Fischman (drums). They released their self-titled album L?bido in 1998. It included hit singles like "Como un perro" and "Sed". L?bido
became known as one of the best rock bands in Peru and they started touring all over the country. As a result of the success of its first album, the group began to play at Peru's premier venues; meanwhile, their music began to be noticed by diverse North American radio stations with Spanish rock programming, in specialized magazines, and on diverse music web sites.

In 2000 the band took a break from touring to record their second album titled Hembra. It was produced by Tweety Gonz?lez and mixed by Doug Trantow, and was recorded in Buenos Aires and Los Angeles. This album marked the beginning of L?bido's working relationship with Sony Music, which helped reinforce its presence in the Peruvian market; the market had already been struck by a high level of piracy. The album, which attracted a lot of attention from the South American press, quickly became number 1 in Peru and the single 'En esta habitaci?n' was nominated for a Latin Grammy Award. With this album they achieved two #1 hits in the rankings of local radio stations with the singles 'Tres' ('Three') and 'En esta habitaci?n' ('In this room'). Both singles were named "Song of the year" in Per?'s three principal rock/pop radio stations. The music videos for the singles were directed by Juan Pablo Olivares y Picky Talarico, respectively.

After this, they began crossing borders, taking their music to places such as Buenos Aires, Argentina (Buenos Aires Hot Festival in January 2001); the United States (the South by Southwest Festival in Austin, Texas, in March 2001; the ASCAP AMPT Music Series Miami in October 2000, and headlining the Show to benefit IRC Miami Chapter in December 2001); Caracas, Venezuela (Festival Nuevas Bandas 2001); and Santiago, Chile (July 2001). During this period they received on behalf of their recording house gold and platinum albums which certified the high sales of 'Hembra' in Peru: its sales in that country were about the same as its sales throughout all the rest of the American continent.

During 2001 they continued headlining the foremost festivals in Peru: the Festival de la Cerveza in Cuzco (June 2000) and Arequipa (August 2001 and 2002); the Feria del Hogar (Lima, August 2001); and the Lima Music Fest (November 2001); all of which were well attended. Throughout this time, they continued holding numerous concerts throughout the country.

September 2002 was a high point in the life of the group. They received a nomination in the first MTV Latin American Video Music Awards and terminated their contract with Sony Music. September was also the start of the recording of their third disc in Estudios Panda (Argentina), under the production of the Canadian Duane Baron and mixing engineer Thom Russo.

In October of 2002, L?bido won the Best South-West Artist honor at the MTV Latin American VMAs. This was a great moment for Peruvian rock music in general, since it marked the first international recognition received by any Peruvian rock band. It was the culmination of all the work done in those first six years of existence.

In December 2002, the band released their third album pop*porn which repeated the success of Hembra, certified double platinum for its high sales volume in only three days on the market. Currently (the end of 2004) it has reached nearly quintuple platinum status. Their single "Fr?gil" was number one for three weeks on MTV and was nominated for a MTV Video Music Award.

In March of 2003, L?bido again took part in the South By Southwest Festival in Austin, Texas. This was a preamble to their first U.S. tour, which included that coast of the U.S. The music video for 'Fr?gil' ('Fragile') had a strong presence on MTV Central, and had the top spot in the Top 20 for three consecutive weeks. In June, the band participated again in the Festival de la Cerveza Cuzque?a. At the start of July 2003, pop*porn was released in the U.S., Puerto Rico, and Ecuador.

In October of 2003, Libido again triumphed at the second Latin American MTV Video Music Awards (VMALAs), when they won the "Best Central Artist" category for the second consecutive year. This also involved their participation in a live Pre-Show for the VMALAs, which was the first performance by a Peruvian rock band to be broadcast live to all of North America.

In the second half of 2003, the group continued traversing South America with appearances in the Festival de la Cerveza Pace?a in La Paz (Bolivia) and the Cabildo Rock & Pop Festival in Montevideo (Uruguay). Meanwhile, in December 2003, 'pop*porn' was published in Argentina by Alerta! Discos (owned by Zeta Bosio), and Chile.

In 2004, L?bido recommenced its activities with the filming of their new video for 'No ser? lo mismo sin ti' ('It won't be the same without you'), which is currently in heavy rotation at Per?'s principal radio stations.

After a long break in the beginning of 2005, original drumer Jeffry Fischman left the band for personal reasons, and to continue his studies in the US. With his replacement Ivan Mindreau behind the drums, by October 2005, their new album, "Lo Ultimo Que Hable Ayer"('The last thing I said Yesterday'), is released. Instead of the rock sound that made L?bido famous, they chose a more experimental sound. With their first radio single "Culpable", that had a strong influence in the radios, they began their promotion for the new album. It had a lot of controversy from the fans, who claimed that it wont be same withouth Jeffry Fischman and Libido's music has been going down hill. Despite the critics, "Lo Ultimo Que Hable Ayer" had a lot of popularity among average listeners and it even brought more and new type of fans.

Band Members: Even Johansen (vocals and guitar), Cato Eikeland (bass) and Jorgen Landhaug (drums). They made an album called Killing Some Dead Time

They played pop-rock, sometimes emphasizing rock and others pop. Brit-pop influence specially Placebo is very clear. Vocals are in English.

Even Johansen now goes under the name Magnet and has released 4 solo albums. Even was also lead guitarist of the Norwegian indie rock band Chocolate Overdose for their first two albums.


3. A South African band.
Libido is an edgy alternative rock band from Johannesburg with an uncompromising sound true to their influences. Guitarist, Barry Gilman, and drummer, Ryan Marshall, have been performing together since they were 13 years old. The strong rapport displayed on stage between these two musicians is as a result of this. In August 2000 the band settled on its current lineup with the inclusion of bass guitarist Duncan Bell. Duncan is no stranger to the industry and has been involved in both the performance side, with bands 3rd Streme & Soldout, and the management side, looking after bands such as Saron Gas & Pestroy. Libido was now ready to start their vigorous touring schedule.

The band released their first demo album entitled ?Experience It? in August 2002 followed by another demo album, ?Long Lost Child? in October 2003. Libido released their first EP in November 2003 entitled ?Feel You?. The following September saw the release of their fourth recording, ?Hotel Room?. This album finally gave the band the recognition they had been working for. The track ?Feel You? was playlisted on all the major regional stations in SA and entered the Top 10 on Highveld, UCT and OFM.

The band draws their sound from diverse influences such as Metallica, Guns ?n Roses, Def Leppard, Pantera, Slayer, Limp Bizkit, Korn, Creed, Sum41 and Nickleback. Their repertoire ranges from commercial rock to graceful ballads back to heavier rock and this range creates depth in their performance.

In 2007 Libido released their first commercial album through Seed/Sheer Sound. ?Take The Blame? was recorded at B# Studios in Boksburg with the talented John Paul de Stephani. JP has worked with a myriad of bands in South Africa including Just Jinger, Fokofpolisiekar, Sugardrive and Fuzigish. The album will be released in Europe later in the year by EMusic Group International.

Libido are sponsored by Jagermeister who assist with their touring, posters, merch and of course alcohol. They are also sponsored by Diesel eyewear.

4. A Polish alternative band.
Few guys with high libido, created an anti-virtuosistic band.
Theres not much info about them because they never was famous and they're not planning to. They finished their "carrier" in 2005.
In libido played: Piotr J. also know as Kubek, Maciek M. vel Matas, hoRacy
hoRacys blog: http://www.horacy.art.pl/ (in Polish)