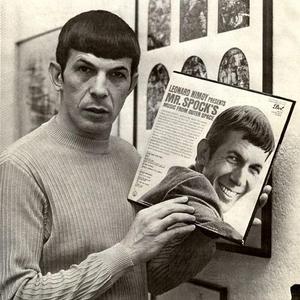 There is more than one artist with this name: an American actor and a New Zealand band named after the actor. 1.) Leonard Simon Nimoy (born March 26, 1931) is an American actor, film director, poet and photographer best known for playing the character Spock in the Star Trek franchise, namely Star Trek: The Original Series . During and following TOS, Nimoy also released several albums of vocal recordings on Dot Records, including Trek-related songs and cover versions of popular tunes.

During and following TOS, Nimoy also released several albums of vocal recordings on Dot Records, including Trek-related songs and cover versions of popular tunes. These recordings are generally regarded as unintentionally camp, though his tongue-in-cheek performance of "The Ballad of Bilbo Baggins" received a fair amount of airplay when Peter Jackson's Lord of the Rings films were released.

In addition to his own music career he also directed a 1985 music video for The Bangles' "Going Down to Liverpool". He makes a brief cameo appearance in the video as their driver. This came about because his son Adam Nimoy (now a frequent television director) was a friend of Bangles lead singer Susanna Hoffs from college.

Leonard Nimoy is a man of many and considerable talents. As an actor he has ranged from Star Trek's indomitable, inscrutable Mr. Spock, to Tevye in the musical Fiddler on the Roof, to Vincent Van Gogh in the one-man stage show Vincent. He has also appeared in plays such as Oliver!, The King And I, Cat on a Hot Tin Roof, Camelot, Twelfth Night, The Man in the Glass Booth, Caligula, and Sherlock Holmes. But Nimoy is more than an entertainer: in 1997 he narrated the A Life Apart: Hasidism in America, about the various sects of Hasidic Orthodox Jews, and he received an Emmy nomination for best supporting actor for the 1982 TV film A Woman Called Golda, to go with his three Emmy nominations for Star Trek. He has also directed three of the best-selling movies of all time: two Star Trek blockbusters and Three Men and a Baby. Nimoy is also an accomplished photographer, vocalist, writer and poet.

2.) A New Zealand band named after the actor, Leonard Nimoy (Peter Wright, David Khan, Tracey Pagey and Mikel Goodwin) was active between early 1994 and early 1997. In this period they both entranced and appalled audiences around the country with a unique combination of beauty and brutality.

In hindsight, and in the best underground tradition, Leonard Nimoy advanced a range of political viewpoints, related to the making and performance of rock music. These not only included obvious issues of noise versus melody or improvisation versus structure (where the Nimoy always took a distinctly ambivalent middle course), but also a whole raft of other issues surrounding both audience and industry expectations of what rock music was supposed to do and how it was to be promoted and presented. As far as this latter area was concerned, Leonard Nimoy stressed band democracy (everyone wrote lyrics, got to scream into microphones and play guitar) and independence (their best music was self-recorded and released). Not surprisingly, in the New Zealand context, these principles ensured that the 4-piece never achieved more (in a material sense) than a modest, albeit enthusiastic, cult following.

To further complicate matters, Leonard Nimoy existed in a near continuous state of evolution during their 3 year existence. In a very real sense the band was always a project in search of itself. Not until early 1996 did the Nimoy adopt their most familiar and notorious form; a back to basics drum machine/guitar noise band, enlivened by acoustic skin and metal percussion and intent on the creation of the most brutal and morbid music possible. Sitting uneasily between rock excess and high-art minimalism, the group deliberately sacrificed structure and melody in favour of percussive and rhythmic slabs of noise, by which musical conventions were reduced to a kind of industrial wreckage. Official site.

The New World of Leonard Nimoy

The Touch Of Leonard Nimoy