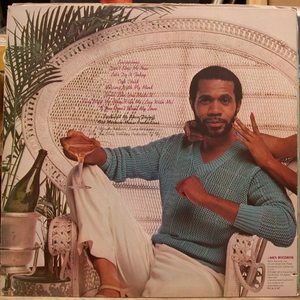 Lenny Williams (born Leonard Charles Williams on February 6, 1945, in Little Rock, Arkansas) is an American singer known for his work in the R&B and soul music genres. During the 1970s, he was the lead vocalist for Tower of Power. As a soloist, he made several hit recordings, including ?Cause I love You? (recorded on his solo album) and ?So Very Hard To Go' Background Williams moved to Oakland at a very young age.

During the 1970s, he was the lead vocalist for Tower of Power. As a soloist, he made several hit recordings, including ?Cause I love You? (recorded on his solo album) and ?So Very Hard To Go'

Williams moved to Oakland at a very young age. Learning to play the trumpet in elementary school fueled his interest in music; his skills as a vocalist were first nurtured by singing in gospel choirs and groups around the Bay Area. He worked with several notable artists, such as Sly Stone, Andre Crouch, Billy Preston and members of the Hawkins family, Edwin, Walter and Tremaine.

After winning several local talent contests, Williams signed his first record deal with Fantasy Records. He cut two singles for the label including ?Lisa's Gone? and ?Feelin Blue?, written by John Fogerty of Credence Clearwater Revival. In 1972, Williams' stint with Atlantic Records was placed on hold, when he joined the emerging funk band Tower of Power. A string of hits, including ? So Very Hard To Go',?Don't Change Horses (In The Middle Of The Stream)? and Eric Jackson's luvin You, written by Williams and Johnny "Guitar" Watson. During his two years with the group, Williams participated in three milestone albums, the gold LP Tower Of Power, Back To Oakland, and Urban Renewal, while touring throughout the United States, Europe, and Asia.

At the end of 1975, Williams returned to his solo projects. Initially signing with Motown Records in 1972, he later moved to ABC Records in 1977 (which was then purchased by MCA Records in 1979). Over the next four years. He scored ten charted hits, including ?Shoo Doo FuFu Ooh?, ?Choosing You?, ?You Got Me Running?, ?Love Hurt Me Love Healed Me?, and ?Midnight Girl?. Williams recorded four more albums from 1977 to 1980, Choosing You, his first gold LP, Spark Of Love, Love Current, and Let's Do It Today.

After leaving MCA, Williams recorded for independent labels, Rockshire and Knobhill. In 1986, he was invited to sing vocals on ?Don't Make Me Wait For Love? a track from Duo Tones, a multi-platinum recording by Kenny G. The song became a top 20 pop and R&B hit the following year.

Givin' Up On Love

Still In The Game