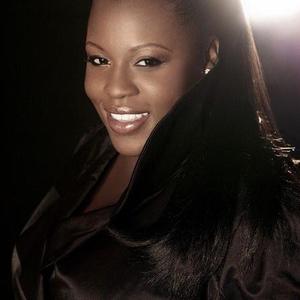 LaKisha Ann Jones[1] (born January 13, 1980) placed fourth on the sixth season of American Idol. Jones was born at Hurley Medical Center in Flint, Michigan, to a teacher at the Flint Foundation Academy, and was raised by her grandmother, Ruth Jefferson Morris. An only child, Jones is a Baptist who began singing at the Mount Zion Missionary Baptist Church at age five.[1] She was formally trained in classical music, although her favorite genre is gospel music.

Jones was born at Hurley Medical Center in Flint, Michigan, to a teacher at the Flint Foundation Academy, and was raised by her grandmother, Ruth Jefferson Morris.

An only child, Jones is a Baptist who began singing at the Mount Zion Missionary Baptist Church at age five.[1] She was formally trained in classical music, although her favorite genre is gospel music. Jones always dreamed of becoming a singer. She was home schooled in Flint, then attended Flint Central High School (now Flint Central Commencement Academy), where, in one of her earliest performances, she appeared in a play called Lead Poisoning. While in high school, Jones performed with one of the groups in the choral department: the Madrigal Singers. Jones graduated in 1998 and attended the University of Michigan-Flint, majoring in music. During college, she performed in the play Godspell. Jones stated in her Idol interview that Flint, Michigan was her home for the first 20 years of her life, and although she had briefly moved to Fort Meade, Maryland, she is now a Flint, Michigan resident again.

After she graduated college, Jones moved to Houston, Texas, where she lived for six years. One of her earliest jobs in Houston was that of a secretary at Abundant Life Cathedral, a church with 7,000 parishioners. Prior to working at the church, Jones sang in the 70-member choir. The choir has produced well-known gospel singer Yolanda Adams, among others. In 2006 , Jones moved to Fort Meade, Maryland, in order to be closer to her cousins and other relatives. At that time, Jones obtained a job as a bank teller at Provident Bank in Millersville, Maryland, which she gave up when she moved to Hollywood to compete in American Idol.

Jones was the 1997 winner of Flint's now defunct supershow, and while living in Houston, she took second place in the 2005 Gimme the Mic competition.

Jones auditioned singing "Think" by Aretha Franklin. The judges were impressed with her powerful vocal and performance, and Simon noted that he "loved this girl". LaKisha was shown emotionally embracing her daughter after being sent into the next round. In her farewell montage on the episode of her elimination it was shown that she also sang "And I Am Telling You I'm Not Going" during her audition. She also performed Stevie Wonder's "Until You Come Back To Me" during one of the Hollywood audition rounds.

Jones received positive reviews for all three of her performances. During her first performance of the smash Dreamgirls hit, Simon went as far to tell her, "I'm very tempted to tell 23 other people to book their plane tickets home."

On March 8, 2007, Jones became a finalist of the sixth season of American Idol.

* Week 2 - 20 March 2007 with special guest Lulu, Jones performed Diamonds Are Forever. She received her first mixed review from Randy and Simon. Simon noted that although she was good vocally, she sounded like she was 50 years older. Jones replied that if she sounded this good 50 years from now, she'd be all set.

* Week 3 - 27 March 2007 with special guest Gwen Stefani, Jones performed Last Dance by Donna Summer. She received positive reviews from the judges, who especially liked the fact that she sang an upbeat song compared to her usual ballads.

* Week 4 - 3 April 2007 with special guest Tony Bennett, Jones sang "Stormy Weather", and once again received positive reviews from all judges. She was one of the top 3 vote-getters, along with Melinda Doolittle and Jordin Sparks.

* Week 5 - 10 April 2007 with special guest Jennifer Lopez, Jones sang Conga by Gloria Estefan. Although she "wowed" Randy with her nice runs and by "coming out of her shy box," Paula and Simon felt it was a "safe" performance.

* Week 6 - 17 April 2007 with special guest Martina McBride, Jones sang Carrie Underwood's hit Jesus, Take the Wheel, for which she received generally negative reviews. Randy wanted her to make it more of her own, and Paula agreed. Simon felt that she didn't go with the song, since country music was more of an unfamiliar territory to her.

* Week 7 - 24 April 2007 during the Idol Gives Back special, Jones performed season 3 winner Fantasia Barrino's hit I Believe, but once again received mixed reviews. Randy noted that she sounded good vocally, and Paula preferred Barrino's version. When Simon began giving a somewhat negative critique, the audience interrupted him several times and made it difficult to finish.

* Week 8 - 1 May 2007 with special guest Bon Jovi, Jones performed This Ain't A Love Song by Bon Jovi. She received ultimate praise from the judges. Randy noted that "LaKisha was back." After the performance, when Simon even said he wanted to kiss her, Ryan Seacrest prompted him to do so, which he did. He then told LaKisha she had "nice lips" and that he "loved them."

* Week 9 - 8 May 2007 with special guest Barry Gibb, Jones performed Stayin' Alive and Run To Me. She received mixed reviews from the judges. During the first performance, the judges felt she did not need to embellish the songs with any runs and that she could have kept the melodies. Simon noted there was "no kiss tonight." Her second performance was better received. All three judges noted that it was good, however Simon still felt that she and Blake Lewis were vulnerable. She was eliminated on May 9, 2007.

Jones performed at the American Idol 2007 finale, along with the top 6 girls and Gladys Knight. During her elimination she said " I'm glad I auditioned at American Idol. I'm glad people believed in me enough to think that I could be here."
Post-American Idol

After being voted off on American Idol, Jones plans to get a quick start on her career. She is already scheduled to tour with the Top 10 Idols on the Idols tour. Jones says that she will also be focusing on two goals: a record contract and a new home, which is likely to be in Houston, Texas.[2]

Performed the Star-Spangled Banner at Comerica Park before the Detroit Tigers game on June 8, 2007 versus the New York Mets.

LaKisha also had two homecoming events. The first at the Abundant Life Cathedral Church in Houston, Texas (Houston was her home from 2000 to 2006) on May 30th, 2007. This date was also declared 'LaKisha Jones Day' in Houston by Mayor Bill White.

The other homecoming was at Atwood Stadium, Flint, Michigan, where LaKisha was born and raised and where most of her family still resides, on June 9, 2007. It was at this ceremony that she received a $6,000 check and six-month free lease on a new Buick LaCrosse. She also received a Flint watch, personalized tree ornaments from Bronner's and a card signed by 300 fans.

June 10, 2007 was declared to be 'LaKisha Jones Day' in Michigan by Gov. Jennifer Granholm at Michigan State Capitol, Lansing.

In an interview in Toronto, LaKisha revealed that there are deals on the table and expressed her wish to record either a Soul album or an Inspirational Gospel album or maybe both. She also said that she may do some Broadway.

So Glad I'm Me