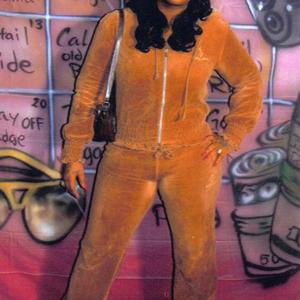 La Chat, real name Chastity Daniels, is a female rapper associated with Three 6 Mafia. She is related to group members Juicy J and Project Pat. First gaining wide recognition for her appearance on Project Pat's Chickenhead song, she along with Gangsta Boo lends a female's perspective to Three 6 Mafia's often misogynistic raps. She has released three studio albums, Murder She Spoke, Ultimate Revenge, and Dramatize. In the liner notes for Dramatize, released in 2004, she included her phone number so fans could contact her. Today, she has signed to her ex associated ?s rival Yo Gotti's label.

Where most female artists in the rap game often boast more impressive looks than MC skills, La' Chat represented a new style of female rapper -- the female thug rapper. Following the precedent set by fellow female thug rappers from the South -- Mia X and Gangsta Boo -- Chat broke through as a member of an established clique (Three 6 Mafia) and represented a feminine point of view.She first was featured on songs with Tommy Wright lll, and was a member of the group "Ten Wanted Men".Yet Chat didn't rap about Prada like Foxy Brown, never resorted to overt sleaze like Lil Kim, and wouldn't even bother with crossover tactics like Eve. No, Chat represented the ghetto with pride. She raps about street politics, drug dealing, casual sex, and staying true to the thug life. Her breakthrough came on Project Pat's "Chickenhead," one of the first Three 6 Mafia-produced songs to get national airplay. She then reprised her role as the feminine foil on Three 6 Mafia's "Baby Mama" from the Baby Boy soundtrack. These two impressive performances set the stage for her debut album, Murder She Spoke, which appeared in late 2001.