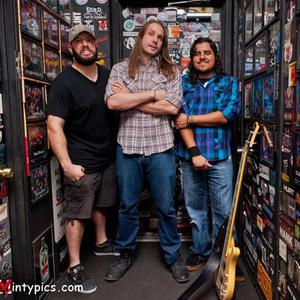 KYNG the southern California hard rock trio, originated in January of 2008 in Los Angeles. Singer/songwriter Eddie Veliz bassist, Tony Castaneda and drummer Pepe Clarke Magana, after years of working off and on with each other on various projects, decided to propagate the idea of a band that would closer fulfill their musical desires. Within months of sessioning the three were sold on the chemistry and shortly after that went into the studio to record their debut album.

The sound they realized was exactly what they had sought after, a unique and universally appealing combination of heavy and captivating concepts, channeling influences from black Sabbath, Led Zeppelin to the Foo Fighters and Queens of the Stone Age. "We wanted a band that could stand alongside anything in the scene, have the ability to crossover seamlessly and still bridge who we are.? KYNG's versatile approach of a sweet devastation bleeds from an artistic drive toward a momentum described as "California Heavy". Their evolution will undoubtedly blaze a trail that redefines what is expected and defines the giants they will become.
Their first album, Trampled Sun, on REALID Records is set to hit the streets of the US and the World Wide Web September 27 while their first two singles, Falling Down and Trails in Veins, both mixed by Mike Watts (Adelita's Way, Hopesfall, Quicksand, Brand New), are set to take over the airwaves and online channels mid July and will be available at iTunes July 26th. The digital deluxe of Trampled Sun will contain 15 tracks exemplifying the bands great range and how much music KYNG has to offer the planet earth.
The Los Angeles based trio, hailing from LA and parts of Mexico, is as unique in spirit as their sound. Reminiscent at times of the metal and hard rock of the late 1970's in style and musical collection, with a presentation that is totally heavy, classic and modern-day all at once, they are sure to refresh the Active Rock and Metal landscapes of today and tomorrow. As drummer Pepe Clarke Maga?a puts it, ?I think we're doing stuff, or a combination of stuff that has been done before, in a way it's never been done before.? Their sound on Trampled Sun easily provokes the question, ?Is that really just 3 dudes?? The pipes on Eddie Veliz reminiscent of Cornell is his early days, the thunder brought by Pepe Clarke Maga?a on the drums and the rolling rhythms brought by bassist Tony Casta?eda have KYNG meant for great things.
Completing dates with The Sword, KYNG is currently out with Black Stone Cherry and Pop Evil and plan on touring forever as the road is the life's blood of any young hard rock band looking to take over the world. In the land of pigs, the butcher is KYNG.

Breathe In The Water