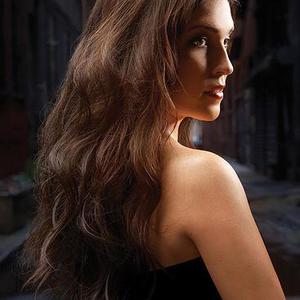 Hearing Kristina Train for the first time is nothing less than a revelation: her sunny, easygoing demeanor and youthful good looks belie the heart-wrenching power of her voice. Train's Blue Note debut, Spilt Milk, is urbane and soulful, lush in its arrangements but intimate in its emotions, built on a foundation of classic and deeply felt southern soul. The title track unfolds with an almost cinematic grandeur, its string-laden chorus swelling with widescreen melancholy.

Balancing the sultry with the strong, Train excels on bittersweet breakup/makeup numbers like ?Don't Remember? and ?It's Over Now.? As the aphorism of the album title suggests, the album tells the story of an indomitable spirit. Train knows how, over the course of a song, to walk away from a relationship with tremendous style.

Spilt Milk was recorded in London with Jimmy Hogarth, the sought-after British producer whose recent credits include Duffy, Corinne Bailey Rae and James Blunt. Powerhouse songwriter, multi-instrumentalist and arranger Eg White ? Grammy Awards Record of the Year nominee for Adele's ?Chasing Pavements? ? co-wrote most of this material. Singer and pianist Ed Harcourt also co-wrote two, including the climactic ?Far From the Country,? an especially poignant and personal conclusion to the disc, about the physical and emotional distances one must bridge to keep love alive

For inspiration, Train turns to Aretha Franklin ? ?There is not a song that Aretha has sung or will ever sing that doesn't just melt me? ? along with blues/R&B cult figures like former Stax star/Raelette Mable John and Bob Dylan-favorite Karen Dalton. Says Train, ?I wanted my album to offer glimpses of my influences, not sound like my influences. Jimmy, Eg and I are of similar backgrounds, we appreciate the same music; we have similar tastes. The arrangements are just what we felt the songs needed, they give the songs flavor but don't try to steal anybody else's style. I hope the album is a nod to the music I love, while still being modern.?

Music has been at the center of Train's world since she was a toddler, when her mother encouraged her to play the violin. Train took to the instrument, but, more importantly, she also discovered an innate aptitude as a singer, with unerring pitch and a preternaturally mature delivery from a very young age. Says Train, ?There's depth to my voice and I think it comes from a lot of different places. But the way I sound today is the way I always sounded -- except in a tinier body.?

As an artist, Train could never simply be described as a product of her times and that has allowed her, on Spilt Milk, to create music that can arguably be called timeless. Her mom, who raised Train alone, fashioned what some might view as a sheltered existence for the young Train, keeping her away from television and pop radio. But what she really did was provide a fertile laboratory for Train to freely grow as a young woman and a singer, apart from the vagaries of trends. Train took music and ballet lessons and listened to classical music and opera, along with jazz and blues. Her violin training definitely came in handy: Train has arranging credits on three of her tracks and overdubbed strings on two of them.

Though born in New York City, Train was raised in Savannah, Georgia, and southern soul and gospel, which she sang in church and school choirs growing up, has had the most profound effect on her work. Almost as significant was the moment when, as a teenager, she unearthed her mom's tucked-away stash of vinyl albums from the sixties and seventies: Joni Mitchell, Jimi Hendrix, Led Zepplin. Say Train,? I remember hearing Janis Joplin's records and thinking, what is that all about? We lived in downtown Savannah, in a house kind of like a New York City brownstone. When we had thunderstorms I would go up to the roof and scream at the top of my lungs because I wanted to make my voice raspier. God only knows what that's done to me!?

By the time Train was 19, she was already singing professionally, albeit locally. A producer based in the south who'd spotted Train arranged to bring her up to New York City to showcase for Blue Note. The label chiefs offered Train a development deal ? but her mom had other ideas. She insisted her daughter go to college first. Many a confident and headstrong young artist would rebel and go it alone, accept the deal and take their chances. But Train ? reluctantly, she now admits ? listened to her mom. She agreed to attend college in Athens, Ga., keeping her hand in music by joining a band and spending far more time rehearsing and gigging than hitting the books. And when she was ready to return to her career full-time, Blue Note was still waiting.

It was time well-spent, Train now realizes: ?I know that at 19, I would not have made this record, which is the record I always wanted to make. This is the album that defines who I am. At 19, I don't know what I would have put out. I believe everything happened for a reason. It took this amount of time for me to get here and to make this record. I always knew it would happen. ?

Train made several trips to London over the course of two years, to write with Hogarth and White, but the actual recording moved quickly. In fact, Train was such a natural that some of the vocal performances they chose came straight from the song demos they'd originally done. Right before they were about to embark on their final sessions, though, a disastrous computer glitch during file back-up resulted in the loss of much of what they'd already completed. As Train recalls, ?It was the perfect electronic storm.? Undaunted, she and her cohorts went back in and re-cut the vanished material with even more passion and determination, the setback turning out to be far more inspiration than challenge. Looking back, Train says, ?I don't think anything was lost. I don't think there was this one magic moment that we could never recapture. I love what it is today.? And the experience provided her with an album title. ?Don't cry over spilt milk.?

Train's confidence and faith in what she has created is part of what makes Spilt Milk so thrilling: ?There's just this magic thing that happens sometimes and you think, I want to sing this song for the rest of my life ? I want to live in it, I want to bury myself in it, I want to wriggle around in it.. Every time I finished one, it was like, I can't believe that, at this point in my life I finally have a song I would fight for, that I believe in 100% percent. And now I have all these songs together on an entire album that I feel this way about. For me, that's my college degree.?