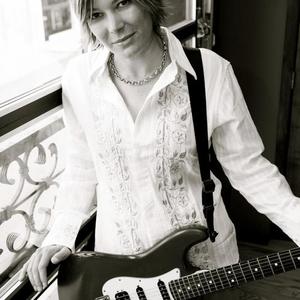 Kristie Stremel sings from the heart of America. It's a tough place. Yet her songs turn the details of the daily grind into reasons to keep pushing. In a time of despair, her music fights for hope. Stremel's western Kansas childhood home can be found precisely in the middle of nowhere-too far off the beaten track for most concert tours, or even to receive FM radio. It's the kind of place where most Americans live their lives: off the radar - unseen, unheard and easily forgotten - facing a regular diet of boredom and bad jobs.

Stremel's western Kansas childhood home can be found precisely in the middle of nowhere-too far off the beaten track for most concert tours, or even to receive FM radio. It's the kind of place where most Americans live their lives: off the radar - unseen, unheard and easily forgotten - facing a regular diet of boredom and bad jobs.

In that world, Stremel began to fashion a place she could call her own out of the Johnny Cash and Waylon Jennings songs that her guitar-playing father taught her. In 1986, at age 12, she entertained her family with her first electric guitar. At 15, she caught Joan Jett at the county fair and decided to put together a band; it performed at the local skating rink and school dances. Transplanted to Kansas City the summer before high school, she got serious about writing songs.

At 19, those songs helped her start building a fan base in the area. By 21, Stremel was a crowd favorite in one of Kansas City's most promising bands, Frogpond, which released a 1996 album produced by Everclear's Art Alexakis. The next year, her growing stockpile of songs led her to form her own band. She named it after the Interstate 70 off-ramp that led to her hometown, and Exit 159 released an appropriately titled 7-song EP, "Lost on Earth." It yielded one regional radio hit, and the full album that followed produced two more. The band consistently packed some of the toughest houses in Kansas City, toured the West Coast twice and received the Pitch newspaper's prestigious Kansas City/Lawrence Area Music Award for both Best New Band and Band of the Year.

But over the next six years, despite winning another Pitch Music Award for Best Female Vocalist, Stremel never really got where she wanted to go. And the perspective she gained from that hard reality helped her produce her best and deepest work. Stremel's pockets of fans across the country treasured the three sophisticated and ambitious albums (and one EP) that followed. The wisdom in those albums came from years of leaping for brass rings and landing on barroom floors. Still a largely unknown artist, Stremel never stopped growing as a musician and a lyricist, probing the side of the American Dream that doesn't make the evening news.

Out of her struggle comes 10 Years: fourteen of Stremel's best songs, all produced by Springfield, Missouri legend Lou Whitney (member of the Skeletons and the Morrells, producer of, among others, the Del Lords and the Domino Kings). 10 Years includes five brand new, dramatically deeper performances of fan favorites. They're topped by two brand new compositions - "Have It All" and "It's Not A Phase"- that raise the stakes even higher. The result is a richly textured, hard-focused statement of what it takes for a soul to survive in today's America. A voice calling in a man-made wilderness.

And yet ... it's not alone. Because what Kristie Stremel shows most poignantly is how the demand to be heard, to have meaning in life, binds people together. It's a cry from the heart of the country to the one in our dreams.

All I Really Want