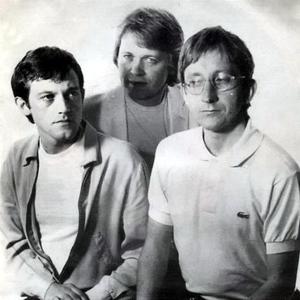 Warren and Davis first worked together as members of the Beatles-esque UK cult outfit Stackridge. Their third album The Man In The Bowler Hat was produced by George Martin and achieved their only UK Albums Chart entry, peaking at number 23 in 1974. A U.S. version of the album Pinafore Days scraped in at the bottom end of the Billboard albums chart in early 1975, "peaking" at #191. Bassist Warren and drummer Davis had drifted apart even before the inglorious demise of Stackridge.

Bassist Warren and drummer Davis had drifted apart even before the inglorious demise of Stackridge. It took the ascension of the new wave movement four years later to get the Warren's creative energies fired up to the point where he decided to contact his old band mate, Davis, by mail to see if a new collaboration was possible. Davis was interested in the idea and the reunited duo began writing and recording in early 1979 under the name The Korgis (whose line-up would eventually expand to include guitarist Stuart Gordon and keyboardist Phil Harrison).

Right from the release of their offbeat first single "Young 'N Russian", The Korgis pursued oddball songwriting. In the words of music critic VBC, "Furthering this tendency, the whole of their self-titled debut album played like a strange tug-of-war between two bands: one captivated by breezy, 1960s pop- indebted harmonies straight out of The Hollies with a modern, synth-lined production sheen not unlike that of Supertramp, and another interested in the fractured influences and slightly screwy lyrical stylings of new wave."

The band's first hit single, "If I Had You," made the Top 20 of the UK Singles Chart in the summer of 1979. Encouraged, The Korgis immediately set to work on their follow-up release, which appeared the following year.

The album Dumb Waiters saw The Korgis in a more explicitly pop vein than their first album. The album broke into the UK Top 40 in the late summer. The centrepiece of Dumb Waiters'' success, and the song that The Korgis will always be remembered for, was "Everybody's Got To Learn Sometime". It propelled The Korgis into the Top 5 on the UK charts, while also giving them their only charted record in the U.S., as it reached the Top 20 of the Billboard Hot 100 right at Christmas, 1980 (Dumb Waiters reached #113 at around the same time).

The band chose "If It's Alright With You Baby" as the follow-up single to "Everybody's Got To Learn Sometime" but it peaked at only #56 later that summer. A third album, 1981's Sticky George, which leaned more towards the 1960s influences, disappeared virtually on release, and ended The Korgis' tenure with their record label, Rialto Records. The band broke up soon afterwards with little fanfare.

Andy Davis continued to record for Rialto with his off beat new band Slow Twitch Fibres and despite several releases failed to make any commercial impact.In 1986 James Warren's solo album, Burning Questions, was released under the Korgis' name and was received with apathy. Later, with Davis back on board, they re-recorded "Everybody's Got To Learn Sometime". The reason for this was they had no rights to the original recording. Their reunion album, 1992's This World's For Everyone, attracted hardly any notice outside of the nostalgia circuit. Following this disappointment The Korgis disbanded again.

In September 2004 Zucchero and Vanessa Carlton entered the French charts with a cover version of "Everybody's Got To Learn Sometime" and had some success. That same year, Beck also covered the song for the Jim Carrey film Eternal Sunshine of the Spotless Mind. Other cover versions of "Everybody's Got To Learn Sometime" also took the song back into the UK charts over the years, most notably those versions by The Dream Academy (1987), Yazz (1991), Baby D (1995) and French techno duo Marc et Claude (2000)

In 2005 they reunited again for a film shoot and recorded the fourteen-track album Unplugged, which was released on the Angel Air label the following year.

In 2006 they released their first single in twenty years, "Something About The Beatles".

The Best of The Korgis

Klassics - The Best Of The Kor