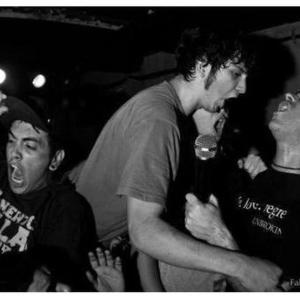 1. Knockout was born in the suburbs of Chicago in January of 1999. This 4-piece quartet that likes to play fast, melodic, pop-punk with influences such as Humble Beginnings, NOFX, Blink-182, the Ataris, Strung Out and Pulley. They have played all over Illinois and have toured out to California. They have played with bands such as Unsung Zeros, Mest, Allister, Sloppy Meat Eaters, River City High, 5o4plan and Rise Against.

Knockout has put out a few recordings themselves and have recently released a 9-song CD on Mr. Good Records titled, "Driven to Distraction". After their first release, they toured heavily with many local bands, mainly 5o4plan, and made very good friends along the way, such as Fall Out Boy. They even introduced Fall Out Boy to Sean O'Keefe who later recorded and produced their break-through album, "Take This To Your Grave" Where they even name-dropped KO in the "thank you" section as "their brothers in metal." Then in October 2002, they release their full length CD "Searching for Solid Ground" which contains 13 tracks that'll keep you rocking until that unwanted pregnancy is aborted. "Searching for Solid Ground" was released by their new label they signed with, Fearless Records.

Then later in July '02, Knockout lost a crucial member when TJ decided to quit the band, and go to pursue other projects. No fear though, the Chicago pop-punkers added one of their original members in Chris Tag, the bassist. After the new addition, Knockout toured like no tomorrow going countlessly around the US, with bands like Near Miss, Anti-Freeze, and yet again 5o4plan. But as the months went by, interturmoil between the band came out about the music and the writing. To make things worse Chris Tag quit again, so the band brought in John Regan to replace him at the four strings. With new members the band tried to patch things up, but to no avail. Band member's began quitting over arguments over the music and De'Mar and John sided and quit. Without a half the band, Jeff brought in his friend Spencer Johnson to play bass and Mark Rhoades, who was the former drummer of another Windy City band, Starstruck. But finally after much argument and hardwork, Jeff and Knockout decided to finally call it quits in August of 2003.


2. KnockOut is also the name of a rock group from Modena, Italy.

3. KnockOut was a country punkrock band from USA. Later they chanced band's name to Youngland.