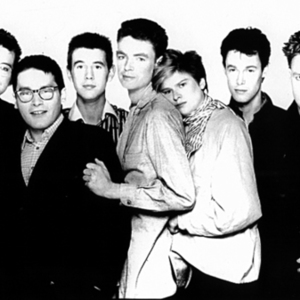 Kissing the Pink is a dance/synth pop group from Scotland and England. Members included Nick Whitecross, John Hall, George Stewart, Josephine Wells, Pete Barnett, Sylvia Griffin, Simon Aldridge and Steve Cusack. Their first single was "Don't hide in the shadows", made with Martin Hannett, but it wasn't until they changed managers and signed with Magnet Records that they began to get any airplay. They recorded their first album in AIR studios with producer Colin Thurston, who had engineered Bowie's Heroes and later worked with Duran Duran amongst others.

Kissing the Pink had wanted Brian Eno to produce the album but Magnet thought Thurston would make a more commercial impact. After a series of near-misses with tracks off the upcoming album the single "last film", with its memorable whistling, reached the top 20. The album, Naked, didn't sell a lot of copies but was a favourite with the college crowd who presumably appreciated its intelligence and wit. Most people when they talk of Naked marvel at the sheer variety of songs on the album, and while this may be its abiding strength, at the time it probably made the album too hard to classify, and thus it was largely ignored.

Their first Hot 100 entry was "Maybe This Day," which hit #87 in 1983 In 1985 following the departure by some of the members they shortened their name to KTP and began having hits on the Hot Dance Music/Club Play chart. The most successful was "Certain Things Are Likely," which spent three weeks at #1 in 1987. That song also became their second Hot 100 entry when it peaked at #97 later that year. From the same album "One Step" was the biggest selling single in Italy that year. When they were given an award on an Italian television show they mistook it for an ashtray.

During the late 1980s their music became even more club friendly and by the end of the decade they had recorded several albums'worth of music that broke new ground in up and coming dance genres. While their pursuit of the avant garde through experiments with form, sound, and equipment, pushed their music into many new areas, the neo-pagan rave scene of 90s Britain also gave their lyrics a mystical flavour, with such sessions as the Ascendant Masters, Jon Hall's Techno-Shamnic Ritual, and the Dalai Lama tracks, using synthesizers and filters along with frequently furious rhthyms to hypnotise the listener.

The band are to feature on four tracks on the new X-Press 2 album Makeshift Feelgood, alongside Tim DeLaughter, Kurt Wagner and Rob Harvey from The Music

Never Too Late To Love You (VLS)

Big Man Restless / The Other Side Of Heaven (VLS)