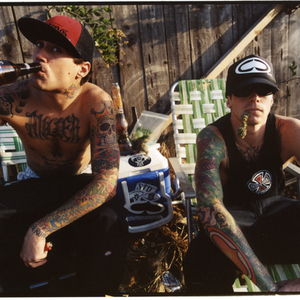 Kingspade originated in southern cali. The two members from kottonmouth kings "D-Loc and Johnny Richter" show their true skills in rhymes about weed drinking and partying originated from the i.e and o.c. Both were childhood friends growing up in P-town living a block away playing on the same team, P-town ballers (PTB). Kingspade was made up from king, as in Kottonmouth King, Spade as in SRH spade. Now you have Kingspade, the tag team duo put heart and soul with bumpin' beats courtesy of DJ Bobby B.

Although they still draw from the same California hardcore punk and Beastie Boys eclecticism as Orange County rapmetal outfit the Kottonmouth Kings, Johnny Richter (Tim McNutt) and D-Loc (Dustin Miller) splintered off to create a more strictly rap group, Kingspade, in the early 2000s. Still a part of the Suburban Noize family, Richter and D-Loc spit their stoner rhymes over beats with heavy Southern bass and G-funk party grooves instead of the raprock fusion. The two knew each other way before the formation of the Kottonmouth Kings as childhood friends in Placentia, CA. Richter was not an original member of Kottonmouth, but he had been friends with the entire band. Richter became an official MC/vocalist in time for their second album, Hidden Stash (1999), after another member departed. Richter and D-Loc debuted as Kingspade on the sixth Kottonmouth Kings LP, Fire It Up, in 2004. Carving out a new fan base from Suburban Noize's cult following, they released their eponymous fulllength later that August and returned in 2007 with P.T.B., an acronym for "PTown (as in Placentia) Ballers."

Throw Your Spades Up CD1

Throw Your Spades Up CD2

Throw Your Spades Up (DVDA)