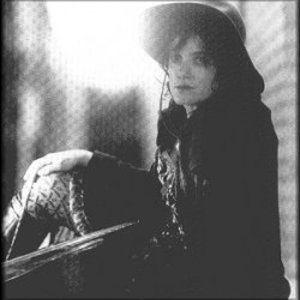 Kimmie Rhodes is a Singer-songwriter from Austin, Texas. Kimmie's multi-platinum selling songs have been recorded by such stellar acts as Willie Nelson, Wynonna Judd, Trisha Yearwood, Amy Grant, CeCe Winans, Joe Ely, John Farnham, Waylon Jennings, Peter Frampton, Mark Knopfler and Emmylou Harris. A creative and prolific artist, she has recorded and released a total of twelve solo CDs, written and produced three musical plays and a catalogue of hundreds of songs, and published a book.

she grew up in Lubbock, Texas and began her singing career at the age of six with her family gospel trio. She moved to Austin in 1979, where she met DJ and producer Joe Gracey, an instrumental figure in the Austin progressive country scene, who she eventually married. In 1981 she recorded her first album, "Kimmie Rhodes and the Jackalope Brothers" when Willie Nelson invited her to use his studio. In 1985 she recorded her second album, "Man In the Moon". Her third album "Angels Get The Blues", recorded at the original Sun Studio in Memphis, was released in 1989. These records led to a series of British and European tours which received rave reviews. Kimmie's 1998 CD release is a compilation of original songs from these three albums called "Jackalopes, Moons & Angels". This Jackalope Records release marks the first time these songs have been available on CD in one collection.

Her promotional tours created a solid fan base in the U.K., Ireland and Europe. She has headlined with her band at festivals all over the world and has appeared on many European and American TV and radio broadcasts. She has also appeared at many of Willie's Farm Aid concerts and July 4th Picnics. Willie says Kimmie is ?an undiscovered superstar? and together they recorded two of her originals for his album Just One Love and a duet CD, Picture in a Frame.

Kimmie appeared on Austin City Limits with Emmylou Harris, Dave Mathews, Patty Griffin, and Buddy & Julie Miller, where she and Emmylou performed their song ?Ordinary Heart?. She guested on Late Night With David Letterman, performing ?West Texas Heaven? at his request. Kimmie's TV appearances also include a songwriter ?guitar pull? Austin City Limits show with Willie Nelson, Waylon Jennings, Kris Kristofferson and Billy Joe Shaver. New West Records recently released a DVD of that show titled ?Outlaw Country?. She performed in two segments of The Nashville Network's ?Legend Series? hosted by Willie Nelson and another hosted by Waylon Jennings. Waylon said, ?When I hear Kimmie sing it makes me know what the phrase ?pulling on your heart strings' means.? Kimmie co-wrote a song, "Lines", with Waylon for his Justice release "Right For The Time".

Kimmie's movie soundtrack credits include ?A Heart That's True? for the ?Babe: A Pig in the City? CD, ?I'm Not An Angel? featured in the soundtrack of ?Mrs. Winterbourne? and a song in the ?Daddy's Dyin' Who's Got the Will? soundtrack. Her song, ?Shine All Your Light?, co-written with Beth Nielson Chapman, was recorded by Amy Grant for the Touched By An Angel TV series soundtrack and CD, which reached the Top Ten in Billboard's CD charts. Beth recently chose the song as her first single off her new CD ?Prism?. She co-wrote ?Ordinary Heart? with Emmylou Harris and the song was featured in the soundtrack to the movie ?Happy Texas?. Emmylou's performance of the song was nominated for a Grammy.