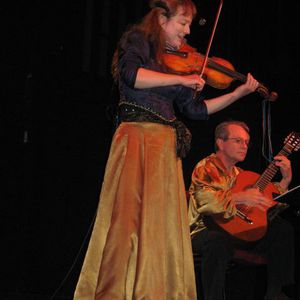 In the best of Gypsy fashion, Kim Angelis can change before your eyes. This internationally acclaimed composer and violin virtuoso is often described as ?transforming herself from a soft-spoken, modest and spiritual person into a wild creature of the violin with flying skirts and hair, a few broken bowstrings and stomping heals. She is the composer and performer of an international range of pieces written for specific stories and, like Vivaldi, paints the story with surprising color and detail. While her roots are from the University of California, Irvine, her violin plays like Paganini.

You may have heard the passionate, gypsy-inspired music of Kim Angelis on Network TV, PBS,NPR, or during the 2000 Olympics in Sydney, Australia, when world champion gymnast Kui Yuanyuan of China used music by Kim Angelis for her floor exercise. NBC gave Kui Yuanyuan's performance prime-time coverage, exposing Kim's music to the ?world's largest audience?. The independent film, Sweet Nothings, released in Feb. 2001, exclusively features music by Kim Angelis, which was nominated for Best Original Score by the California Independent Film Society; the same film was also nominated for Best Score by the International Independent Film Tour. Recently, Kim Angelis signed an exclusive publishing agreement with DSM Producers, one of the entertainment industry's top placers of music in major films and network television - a deal that certainly validates Kim's exceptional compositional gifts. Her 1996 CD, Esperanza, was selected as a ?Choice Recording? by prestigious Strings magazine, and it received a nomination by Just Plain Folks for Best Instrumental Album! Kim's most recent CD, Gypsy's Odyssey, has increased her international fan base with radio airplay in Europe and Australia. This same CD has made ?Top Ten? lists in places as diverse as Santa Cruz, CA, and Herford, Germany!

Kim Angelis has enthralled concert audiences from Ancud, Chile, to Alaska and over the seas to Asia with her dazzling virtuosity and exuberant stage presence. Some of the violinist's most memorable experiences took place on foreign soil; Kim treasures her two concert tours of Taiwan - replete with humorous situations - which culminated in multiple-encore appearances at Taipei's prestigious National Concert Hall. A pair of extended concert engagements in Chile, which included performances at Universities, Galleries, and the spectacular Palacio Vergado, provided fertile ground for the composer's imagination.

But where and how did this musical adventure begin? ?I first picked up a violin when I was 10 years old,? Angelis recently told reporter McKibben Jackinsky of Morris News Service. ?I'd been studying piano since I was 4, so I had the enormous advantage of already being able to read music. My mother had a very eclectic record collection, which included flamenco, classical, and exotic music. Amongst my favorites of her old LPs were performances of Brahms' ?Hungarian Dances' for violin, and the first Max Bruch Violin Concerto. I really wanted to be able to play music like that.?

What Angelis heard clearly worked its way into her music. After a few lessons, her first violin teacher exclaimed, ?You play like a gypsy.?

?I'm not sure what he was referring to,? Angelis said. ?Perhaps I already played with a lot of energy and abandon.?

In addition to her mother's musical influence, Angelis' great-grandmother was a British Gypsy. According to the musician, the Rom people, Gypsies, left India about 1,000 B.C., settled in various countries and reached Great Britain in 1502. Wherever they resided, the Rom adopted that country's culture.

?What we now commonly think of as Eastern European ?Gypsy' music was actually the folk music of that region, kept alive by Rom musicians,? Angelis said. ?So... I have taken the varied influences of classical music, flamenco music, and Eastern European folk music, and tried to combine them into a homogenous style of my own. A rather ?Gypsy-esque' thing to do, yes??

Meanwhile, the music lessons continued, enabling the violinist to combine those varied musical influences. Angelis majored in music at the University of California, Irvine, where she studied with the best violinists in the Los Angeles Philharmonic, including concertmaster Sidney Harth and Ivan Galamian protegee Lori Ulanova. She won every available scholarship, and was featured soloist with the UCI Symphony, performing major works by Vivaldi and Saint-Saens. After graduating Magna Cum Laude, Kim met and later married guitarist Josef Gault, who accompanies her at every concert. Beautiful, historic Astoria, OR, is the place Kim Angelis calls home - it is the rich source of her serenity and inspiration. Here she and Josef are restoring a classic 1918 Craftsman bungalow, which they share with their beloved Collie,?Holly?. Kim's Christian faith plays a major role in her life.To quote Marilyn O'Malley of the Victory Review, ?Kim's classical training, folk influence...and deep spirituality have blended together and burgeoned into some of the most beautiful, moving music I've ever heard.?

But is Kim Angelis a chameleon? You decide.. ?Kim IS her music! Tuck a violin under her chin and this otherwise slight and shy artist becomes a powerful, scintillating dancing presence, somewhere on the continuum between the spirituality of a fiddler on the roof and the ecstatic mysticism of a Sufi dancing.? ( Len Atkins, Sou'westerings)