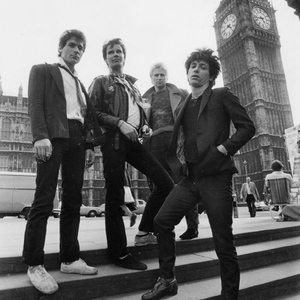 The Heartbreakers were a punk rock group formed in New York in May 1975 by Johnny Thunders (vocals/guitar) and Jerry Nolan (drums), who had just quit the New York Dolls, and Richard Hell (vocals/bass), who left Television the same week. After a few shows, they added Walter Lure (vocals/guitar), who had played with a group called the Demons. In 1976, Hell tried to persuade Nolan and Lure to kick Thunders out, but Nolan was too close with Johnny and kicked Hell out instead. He was replaced by Billy Rath, who, according to legend, was a gigolo.

Hell went on to form Richard Hell and the Voidoids.

Arriving just as the UK punk scene was building momentum, the Heartbreakers developed a following playing in and around London. The Sex Pistols invited them to open on the ill fated Anarchy Tour. They shortly signed up with Track Records. Their debut--and only--studio album, L.A.M.F., featured all the Heartbreakers' popular live songs. The release of the album put a huge strain on the band because of anger among some band members over the poor quality of the mix. Several members left at this point. The band reformed in 1979 for a few farewell shows at Max's Kansas City with drummer Ty Stix filling in for Nolan. The result was the live album Live at Max's Kansas City '79, considered a punk classic.

The band re-formed occasionally to play at New York clubs (and for a sold out show at The Lyceum in London, England in 1984) until the death of Thunders in 1991 of a supposed methadone overdose. The facts remain unclear: Johnny's passport and money were missing. The coroner's report said no alcohol was in his bloodstream, though many witnesses say Johnny was drinking the night before with people that he had just met. He was 38 years old. Jerry Nolan died of a stroke a few months later at age 40.

Live shows often consisted of songs performed with the New York Dolls or taken from Thunders' solo career. Richard Hell rarely plays music live, concentrating instead on writing and spoken word performances. Billy Rath's whereabouts are currently unknown, leading to various rumors such as that he died or became a priest. Walter Lure still performs about once a month with his band the Waldos, playing mostly Heartbreakers songs. The influence of Johnny Thunders & The Heartbreakers is still noticeable today in many punk rock bands. Johnny Thunders solo work is mainly made up of live albums, although he recorded the critical success So Alone in 1978 and Que Sera Sera in 1985. He often worked with Patti Paladin of the band Snatch and they recorded an album of covers, Copycats in 1987.

Down To Kill: Complete Speakeasy 1977 CD2