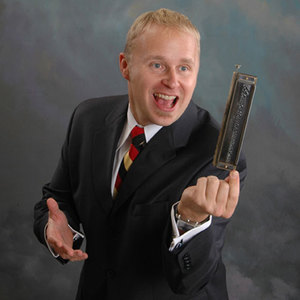 "I remember telling friends up North in '80 that they should go see Stevie Ray Vaughan, but they weren't impressed because he wasn't famous yet. It will give me great pleasure to say, 'I told you so!' about John N?meth. You'll see." Bob Margolin, Blues Revue Magazine Dec/Jan 2005 John N?meth is a rising blues star; a singer steeped in the tradition and reminiscent of B.B. King, Ray Charles and Junior Parker, and a harmonica player of riveting intensity and virtuosity. His decade long career has found him opening for Robert Cray, Keb Mo', and Earl Thomas.

John N?meth is a rising blues star; a singer steeped in the tradition and reminiscent of B.B. King, Ray Charles and Junior Parker, and a harmonica player of riveting intensity and virtuosity. His decade long career has found him opening for Robert Cray, Keb Mo', and Earl Thomas. Performing major music festivals around the United States, Europe, Canada and Asia has brought him critical acclaim.

"Either John N?meth is one of the greatest vocalists in the world or this was the best performance of his life, or both."
Bob Horn, Washington Blues Society

John's origins are an unlikely breeding ground for such an impressive blues talent. A thirty year old native of Boise, Idaho, he grew up singing in a Catholic church and started playing in local bands as a teenager.

N?meth was a featured artist with Anson Funderburgh and the Rockets in 2005 and 2006 as well as a featured artist with The Junior Watson Band in 2002. The Cascade Blues Association selected N?meth as a crowd favorite at the Portland Waterfront Blues Festival in 2002, and the Washington Blues Society called him the show stealer at the Winthrop Rhythm and Blues Festival in 2003. Greg Johnson of Blues Notes writes, "John N?meth possesses rich harmonica tone that easily brings to mind Sonny Boy Williamson and Little Walter."

"Boy! John N?meth can really belt it out!"
Charlie Musslewhite, 2004

John recorded "Come And Get It" with the Junior Watson Band in 2004. The album received rave reviews and scored well on the independent blues radio charts. When John signed a multi-record recording agreement with Blind Pig Records in 2006, label head Jerry Del Giudice expressed "how impressed I was with John's performance the one time I got the chance to see him. In our nearly 30 years in the business we have never before offered a new artist a recording contract on the strength of one performance."

The buzz around John N?meth is substantial, and his Blind Pig debut, "Magic Touch," delivers the goods in spades. From the opening track, an ambitious and fully realized reworking of Junior Wells' classic "Blues Hit Big Town," John's emotive, smooth voice and stellar harp playing introduce a virtuoso of rare depth and power. John's uncanny blend of retro-modern blues and soul music will delight purists and young hipsters alike. Produced by Anson Funderburgh and featuring Junior Watson on guitar, "Magic Touch" is destined to be one of the most remarked upon releases of 2007.

"John N?meth is a natural-born Bluesman, and he proves it with every note he sings, shaping each one with emotion, taste and inspiration. John's expressive Blues harp playing answers his voice and fulfills his songs when he solos. John N?meth makes it sound easy."
Bob Margolin, 2004

"Definitely one of the best club shows that I've ever seen. John N?meth is simply the Blues artist that I feel is most deserving of more recognition. Check the man and his band out whenever you might get the chance."
Don "T-Bone" Erickson, BluesWax, 2004

"Here's a guy that does it all, sings his butt off, wails on the harp, writes great songs and knows how to entertain the people!"
Ken Harris, Blues Bouquet

"Definitely one of the finest new artists performing Blues in the country today. Catch him now so you can say you saw him in the early years of his soon-to-be giant career!"
Greg Johnson, Blues Notes, 2004

May Be The Last Time

The Jack of Harps