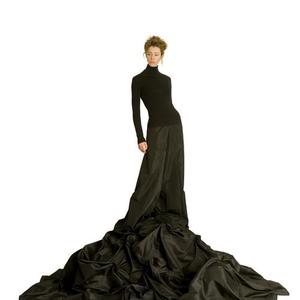 ?When Jo sings, something thaws that I didn't even realise was frozen. It's a magical thing. Jo Hamilton is elemental, gazing out at us with empathy, affection and hope, but perhaps also with the melancholy of some-one who couldn't stay anywhere long enough to feel like she truly belonged. Perhaps it's this distance that makes her perspective unique?. - Sweet Billy Pilgrim (2009 Mercury Music Prize Nominee).

Stemming from a nomadic family with roots in both Kenya and Jamaica, Jo Hamilton was brought up in a house two miles from the nearest neighbour in the wilds of northern Scotland. Her parents moved constantly in her youth, which saw her spending periods in Turkey, UAE, Kuwait, Sri Lanka and Cambodia.?
In her late teens Jo studied classical viola in Edinburgh and at Birmingham Conservatoire. During this period the first hints of a solo talent began to emerge; she quietly recorded an early 3-track EP with the help of guitarist/drummer/producer Tom Livemore (the Ripps/Carina Round/Glen Ballard), and then went on to create a self-produced album of early songs (Palace Place) with the help of other musicians.
It was during the recording of Palace Place that she first met producer Jon Cotton (subsequently producer of Scott Matthews' Ivor Novello winning Elusive), with whom she remained in touch over the next four years.? ?

In the meantime, Jo began performing more widely, supporting Damien Rice and Michelle Shocked, and touring with Colin Vearncombe (Black) in the UK. She contributed viola and vocals to Kirsty McGee's first album, and was invited by Fairport Convention founder (and discoverer of Nick Drake) Ashley Hutchings to sing lead vocals and play viola with first the Albion Band and then his new band the Rainbow Chasers on several European tours.

While welcomed by the folk world, Jo continued to develop her own very different, much darker and more layered material. She worked on developing sounds with Tom Livemore and a live band, and started using a computer for the first time to write.?She travelled to Cambodia, making field recordings on a little minidisc recorder which accompanied her everywhere - recordings which were later incorporated into her work.

Back in the UK, the combined songs she'd accumulated with Tom, on her sequencers and in Cambodia began to take shape as an album. On hearing the sketches, Jon Cotton signed her to his production company Poseidon, and over the next two years they developed the songs into the album Gown.

As the album began to take shape Jo and Jon Cotton developed a short film about it which became her electronic press kit ? shot largely by Jo herself in Slovenia, Italy, France and the UK this film became another labour of love, taking nearly a year to complete in its own right.

Simultaneously, Jo collaborated with award-winning illustrator/animators Dave Neale and Jordan Cadby on the accompanying album sleeve and animations; many of the animations featuring on the electronic press kit.


Jo Hamilton's music exudes empathy. It is a commentary reflecting our own hopes,
our glories and our tragedies; a commentary which somehow manages to
harness the overwhelming nostalgic emotion of the old Gaelic lullabies of
her childhood and apply it unflinchingly to a complex multicultural world
of iPods and urbanism - often with devastating effect. She has the ability
to bring rare emotional depth to bear on the modern world, and as the TV
flickers out and credit cards are declined, she reminds us what it is to won-
der at the world and that while we can still do so, there's always hope.

Jo's debut album Gown has been produced by Jon Cotton (producer of 2007's Ivor Novello winner Elusive by Scott Matthews) and will be released on Poseidon Records on September 21st 2009.