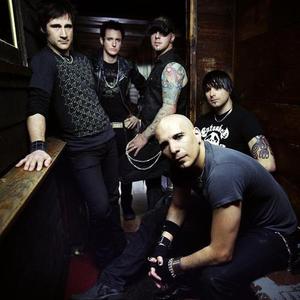 "A good song is a good song man, simple as that!" That's the mercurial and confident, but oh so endearing songwriter and vocalist Rod Black. Black knows his way around a well-written tune. He's recently finished co-writing a slew of them for his brand new band, JET BLACK STARE, and their Island Records debut album, In This Life. Back in early 2007, after becoming frustrated with his past band's creative differences, Rod found the perfect song-writing companion in fellow Vancouver, Canada resident, songwriter/producer Jeff Johnson.

Back in early 2007, after becoming frustrated with his past band's creative differences, Rod found the perfect song-writing companion in fellow Vancouver, Canada resident, songwriter/producer Jeff Johnson. "Give us 15 minutes and we can hammer out a song. We have that rare, special chemistry" says Black gloating on Jeff. "We hardly ever bump heads, we're always on the same page." This harmonious partnership not only set the groundwork for what eventually - along with Shane Hayes (bass), Flip (guitar) and Dave Muselman (guitar), and Dan Swinimer (drums) - became Jet Black Stare, but also created the perfect vessel for Rod's storytelling. "I just want to be as a true as I can be to the song, and for me every song has to tell a story."

At the end of the day, for Black, it's about making people feel connected: Whether it's the epic "The River" ("I'm sick of nine to five/I'm sick of living day to day") or the bluesy ballad "Fly" ("When this temptation turns into my only friend/Lookin' for someone to help me start over again"). It's all about finding the common thread in everyday life struggles. For example, "Fly" was born out of Rod befriending and trying to help some young street kids he used to pass every day on the way to his old office day job. Or take the album-closer "Next To Me," about making personal and familial sacrifices for the greater good and being forced to be away from loved ones: Ambiguously, this soulful Heartland-ready number could be about a traveling salesman, an athlete, a soldier away at war, a rock star on the road?any and all of these, it's reach is universal.

But lest we not forget, JET BLACK STARE are rockers! So while they may get everyone's solar plexus wedged wide-open, they certainly don't mind ramming a steel-toed boot in for good measure. Take for example the record's first single "Ready To Roll," a pedal-to-the-metal anthem that will bring you charging down the drag strip. Fittingly, this track, as well as "It's Over" (the catchiest tune ever written about a cheating ex), are both to be featured in the upcoming EA video game NASCAR 2009.

It's a rather ironic turn that JET BLACK STARE's first single, like a few other legendary classics ("Highway Star," "Radar Love," "Born To Be Wild") is a sexually-charged opus to a muscle car: It was just a few year's ago, during a near-fatal car crash, that Rod wound up in the emergency room. But that's nothing considering that his miraculous survival from that accident was just a few days after the day he died. "I died when I was 19. I heard the doctors say it; they pronounced me dead" says Rod still in amazement years later. "I was what is called a 'flat-line patient.' But the next day I woke up! The doctors and nurses were astonished. 4 hours later I walked out of the hospital and went to work!"

He talks about it in "I"m Breathing": "And now I'm lookin' for the reasons why I'm alive/And now I've finally come to realize." And what he realized he says he has essentially known since he was 6 growing up in a musical family and wishing to be a performer. "My purpose is to do music" says Rod assuredly "and to reach as many people as I can, and hopefully, bring a positive message."

Now with Jet Black Stare's chrome-plated guitars and fist-pumpin' grooves, Rod has found the perfect medium for his stories and contagious vocal hooks?and he's going to need an arena-sized room to show them off.