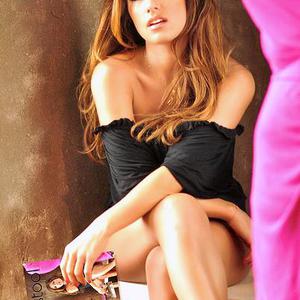 A larger-than-life talent in a petite package, James has been ready for her close-up since she was two, when the well-traveled military girl, born a fiery Aries in a military field hospital in Italy, began singing into a toy microphone and tape recorder, a gift from her mom. By the time she was nine, she was composing her own songs on a plastic guitar and performing in front of large audiences, including the opening of Sea World and the Republican Convention to name a few.

Jessie's music is a candid celebration of her pop and country influences. ?I've wanted to do country music my whole life,? she says. ?But I'm really inspired by the pop world as well. I love both Christina Aguilera and Shania Twain, and I don't think there's anything wrong with that.?

Produced by John Fields [Switchfoot, Jonas Brothers, Miley Cyrus, Jimmy Eat World], the album marked her maturation into a performer who easily straddles the worlds of pop and country. The single, ?Boys in the Summer? which was remixed by hit-making producer and Show Dog ? Universal Music president, Mark Wright made great headway in the Country format with the video receiving a huge response at CMT.

?My debut album was sort of like a trial period, at least for me,? she says. ?It gave me a chance to discover who I was musically. Now I feel I know where I am.?

?I'm an Italian girl from the south who's very passionate,? she says. ?Love is what makes you do everything. It really does conquer all. I've been writing since I was nine years old and I'm very much involved in the creative process. And now that I'm in a happier place in my personal life, I'm spitting songs out left and right.?

In 2011, James made the transition to Nashville-based, country label, Show Dog ? Universal Music where she is currently in the studio with Mark Wright working on her first album for the label.

?I remember hearing a demo on Jessie a few years ago and being very impressed with what a big voice she had for such a young girl,? said Mark Wright, President Show Dog - Universal Music. ?I followed up, only to find that Mercury in New York had signed her. I was so excited to hear from my friend and colleague David Massey at Mercury that Jessie had always considered herself a country artist and would I consider joining forces with him to launch her into the country market. I am proud that SDU and Mercury/IDJ can jointly bring you this exciting, new, soon-to-be superstar.?

James' first single, ?When You Say My Name?, produced by Mark Wright, will be released digitally on iTunes January 31st. The music video directed by Kristin Barlowe will follow shortly.

Boys In The Summer (CDS)

When You Say My Name (CDS)

I Look So Good (Without You) (CDS)