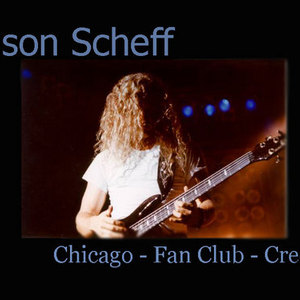 Jason Randolph Scheff (born April 16, 1962 in San Diego, California) is an American bassist, singer and songwriter. Since 1985 he has been the bassist and singer for the veteran pop-rock band Chicago. He is the oldest son of well-known session bassist Jerry Scheff, who toured for several years with Elvis Presley. His brothers Darin and Lauren Scheff are also professional musicians. Scheff started his professional musical career in 1982 as a member of a Los Angeles based rock band named Keane (not to be confused with the British band of the same name).

Scheff started his professional musical career in 1982 as a member of a Los Angeles based rock band named Keane (not to be confused with the British band of the same name).

At age 23, Jason joined Chicago in mid-1985 when Peter Cetera left to pursue a solo career. His ability to closely duplicate Cetera's vocal parts on Chicago hits allowed the band to continue its touring/recording efforts without a hitch; he debuted on lead vocals on their 1986 hit single "Will You Still Love Me?" Besides performing the band's classic material, Scheff has composed several original songs for the band, including their 1989 Top 10 single "What Kind of Man Would I Be?" In 2005, Scheff and Chicago founding member Robert Lamm convinced the band to record Chicago XXX, their first collection of new material since 1991's Twenty 1. Scheff also enlisted Rascal Flatts vocalist/bassist Jay DeMarcus to serve as producer for the new album, which was released on March 21, 2006. Scheff co-wrote seven of the 12 songs on the CD.

Scheff has also enjoyed some limited success as a solo artist, releasing a CD entitled Chauncy in 1996, as well as several duets released only in Japan.

In late 2006, Scheff joined indie supergroup L.E.O. to create the album Alpacas Orgling, a tribute to Jeff Lynne and the Electric Light Orchestra. Alpacas Orgling was released in October 2006, to generally positive reviews.

As of November 2007, Scheff began broadcasting his vocals and music work over the internet via Ustream.tv.