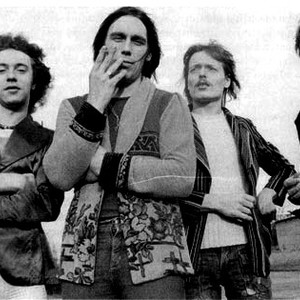 There is more than one artist with this name: an experimental/ambient musical group, a 70s progressive rock band, a Finnish girlgroup, a German metalcore band, and an English singer-songwriter. 1) Jane is a 1970s progressive rock band. Considered to be one of the great German spacerock bands of the 70's. Jane progressive rock, navigating between breathtaking guitar solos, powerful keyboards, polished and mighty arrangements and an almost constantly dragging tempo, added up to the typical Jane sound that had no equal in Germany.

1) Jane is a 1970s progressive rock band. Considered to be one of the great German spacerock bands of the 70's. Jane progressive rock, navigating between breathtaking guitar solos, powerful keyboards, polished and mighty arrangements and an almost constantly dragging tempo, added up to the typical Jane sound that had no equal in Germany.

2) Jane is an experimental/ambient musical group composed of Noah Lennox (Panda Bear) and Scott Mou, who released three albums, most recently Berserker in 2005 on Paw Tracks. Berserker is a set of four ambient soundscapes ranging from six minutes to nearly 25.

3) Jane is a finnish pop girlgroup.
They're from the second edition of Popstars in Finland.
In the show they made two groups, boyband Indx and girlgroup Jane. The public televoted the winner: Indx. Surprisingly Indx vanished from the music scene very soon and their only album was a huge flop. Jane became the real winner. Their first album ?Perhonen? sold nicely and it included a few hits (Their debut single "Valvon" was #1 in Finland).
Before Jane started to record their second album ?V.I.P.?, one of the girls announced that she left the group. Now the group consists of three girls: Mia, Eeva-Leena ja Tea. In January 2006, Jane took part in the Finnish preselections for Eurovision song contest. There they performed two songs V.I.P. and Sivuoireita, but they failed to win a chance to represent Finland in eurovision song contest. heir 2nd album "V.I.P" is considered as flop and the group disbanded in 2007. After the official disbanded Tea Hiilloste has started a solo career.

4) Jane is a German metalcore band hailing from the Ruhrpott area. Jane recorded their first songs in 1998 and released their cd A Chorus of Doom together with the metal/hardcore-band Shaft on AlveranRecords. The music can be described as a mixture of Metal Hardcore and mix of chaos.

5) Jane is also Jane Winiberg, a singer-songwriter from Leigh-on-Sea in England.

6) Jane is Jane Lancaster, a girlfriend of English poet and musician Edward Barton, who wrote It's A Fine Day. It was originally sung unaccompanied by, and credited to, Jane. They recorded and released it independently, and it was played by radio DJ John Peel. It was then heard by Iain McNay of Cherry Red Records, who obtained the rights to the record and released it more widely on his label in 1983. It reached # 5 on the UK Indie Chart, and later appeared, credited to Jane and Barton, on their eponymous mini-album Jane and Barton. Jane's version of the song was remixed by A Guy Called Gerald in 1992.

7) Jane is Jane Helen Johansen, a singer songwriter from Skien, Norway. She is a regular member of Kaada. She released the solo album Hun Har G?tt in 2001 under the moniker Jane.

The View From Here

Close Up and Real