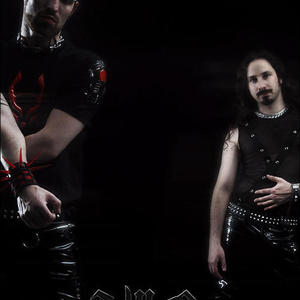 IWR is an dark electro / EBM band, with some darkwave touches, which does not shy from aggressive vocals and sounds. A mix of gothic darkness and industrial treatments, etheric female vocals and harsh male ones, with a fast and catchy tempo, electronic rhythms, and smart use of samples. Approachable and immediately melodic, its combination of aggressive rhythms and gothic electronic influences that serve it as a definite stand out album, resembling in many ways such bands Skinny Puppy, :Wumpscut:, and Velvet Acid Christ.

IWR is a duo, and the first outing was created using the talents of Maor Appelbaum (Vocals, bass guitars, synths, noises & effects, programming), who also did the production, engineering and mixing. Along with long time friend Tal Galfsky (keyboards, synths, samples and programming), together they formed a new force in the darkwave / EBM scene, Adding the angelic female vocals of Jasmin Vodonos, the furious drum programming of Oz_Vult & Tom Davidov and other artist contributions to parts of the songs. An immediate favourite of darkwave and Goth fans alike, the band was featured in several compilation albums worldwide, and also received extensive club play, due to its catchiness and immediate melodies.