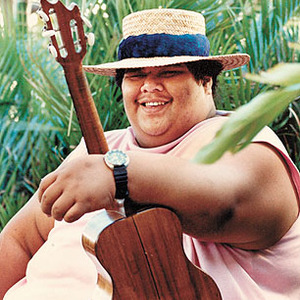 Israel Kamakawiwo'ole was a popular entertainer and singer in Hawai'i until his death at the age of 38 in 1997. He became famous outside Hawaii when his album Facing Future was released in 1993 with his medley of Over The Rainbow / What A Wonderful World. The song has been included in the end of several movies, including Finding Forrester, Meet Joe Black, 50 First Dates and Fred Claus, the TV show Scrubs, as well as the 2002 season finale of the TV series ER...

As his career progressed, Iz was known for promoting Hawaiian rights and Hawaiian independence, both through his music (whose lyrics often stated the case for independence directly) and through his life.

Throughout the latter part of his life, Iz was obese and at one point carried over 750 pounds (340 kg) on his 6'2" frame. He endured several hospitalizations and died of weight-related respiratory illness on June 26, 1997 at 12:18 a.m. at the age of 38. The Hawaii State Flag flew at half-mast throughout the day. Iz lay in state at the Capitol building in Honolulu, where over 10,000 came to pay respects over the course of the first day. His ashes were scattered into the ocean at Makua Beach.

Israel Ka'ano'i Kamakawiwo'ole was born May 20, 1959 to Henry (aka Tiny) KaleiAloha Naniwa Kamakawiwo'ole Jr. and Evangeline Leinani (Keale) Kamakawiwo'ole. He lived the first 10 years of his life in Palolo Valley on O'ahu. Then the family moved to Makaha. He started playing music with his older brother Skippy when he was just 11 years old. But that isn't surprising, as Israel came from a musical family. His uncle is Moe Keale, a living legend in Hawaii.

One day when he was 15 years old, Israel was sitting at a picnic table on Makaha Beach playing his ukulele when Jerry Koko stopped by to talk story. Jerry invited Israel over to his house to kanikapila (play music). He then met Moon Kauakahi and Jerry's brother, john koko. Israel told the boys about his brother, Skippy, and how he could play guitar. After playing togther for awhile, the boys decided to start a group and the Makaha Sons of Ni'ihau were born. First consisting of Israel, Skippy, Moon, Mel Amina (Israel's cousin) and Sam Grey, their first big break was being on the Jerry Lewis telethon.

Early Life
Kamakawiwo'ole was born at Kuakini Hospital in Honolulu to Henry Kaleialoha Naniwa Kamakawiwo?ole, Jr., and Evangeline Leinani Kamakawiwo'ole. He was raised in the community of Kaimuki, where his parents had met and married. He began playing music with his older brother Skippy at the age of 11, being exposed to the music of Hawaiian entertainers of the time such as Peter Moon, Palani Vaughn, and Don Ho, who frequented the establishment where Kamakawiwo'ole's parents worked.

In his early teens, he studied at Upward Bound (UB) of the University of Hawaii at Hilo and his family moved to Makaha, Hawai'i. There he met Louis "Moon" Kauakahi, Sam Gray, and Jerome Koko[2]. Together with his brother Skippy they formed the Makaha Sons of Ni?ihau. From 1976 throughout the 1980s, the Hawaiian contemporary band gained in popularity as they toured Hawai?i and the continental United States and released fifteen successful albums.

"Bruddah Iz" on the cover of Facing FutureKamakawiwo?ole formed the musical group Makaha Sons of Ni?ihau with brother Skippy plus Louis "Moon" Kauakahi, Sam Gray and Jerome Koko. They recorded No Kristo in 1976 and released four more albums, including Kahea O Keale, Keala, Makaha Sons Of Ni?ihau and Mahalo Ke Akua, before Skippy died of a heart attack in 1982. The group became Hawaii's most popular traditional group with breakout albums like 1984's Puana Hou Me Ke Aloha and its follow-up, 1986's Ho?ola. Kamakawiwo?ole's last recorded album with the group was 1991's Ho?oluana. It remains the group's top-selling CD.

In 1990, Kamakawiwo?ole released his first solo album Ka?ano?i, which won awards for Contemporary Album of the Year and Male Vocalist of the Year from the Hawai?i Academy of Recording Arts (HARA). Facing Future was released in 1993 by The Mountain Apple Company. It featured his most popular song, the medley "Somewhere Over the Rainbow/What a Wonderful World", along with "Hawai?i 78", "White Sandy Beach of Hawai?i", "Maui Hawaiian Sup'pa Man", and "Kaulana Kawaihae". Facing Future debuted at #25 on Billboard Magazine's Top Pop Catalogue chart. On October 26, 2005, "Facing Future" became Hawaii's first certified platinum album, selling more than a million CDs in the United States, according to figures furnished by the Recording Industry Association of America.On July 21, 2006, BBC Radio 1 announced that "Somewhere Over the Rainbow/What a Wonderful World (True Dreams)" would be released as a single in America.

In 1994, Kamakawiwo?ole was voted favorite entertainer of the year by the Hawai?i Academy of Recording Arts (HARA).

Kamakawiwo?ole was known for promoting Hawaiian rights and Hawaiian independence, both through his lyrics, which often stated the case for independence directly, and his life.

Death
Throughout the later part of his life, Kamakawiwo?ole suffered from severe obesity and at one point carried 770 pounds (350 kg) (55 stone) on his 6-foot 2-inch (1.88 m) frame. He endured several hospitalizations and died of weight-related respiratory illness on June 26, 1997, at 12:18 a.m. at the age of 38. He is survived by his wife Marlene Kamakawiwo'ole and his daughter Ceslieanne "Wehi".

The Hawai?i State Flag flew at half-staff on July 10, 1997, the day of Kamakawiwo?ole's funeral. His koa wood coffin lay in state at the Capitol building in Honolulu. He was the third person in Hawaiian history to be accorded this honor and the only non-politician. Approximately ten thousand people attended his funeral. Thousands of fans gathered as his ashes were scattered into the Pacific Ocean at M?kua Beach on July 12, 1997.

On September 20, 2003, hundreds paid tribute to Kamakawiwo?ole as a 200-pound bronze bust of the revered singer was unveiled at the Waianae Neighborhood Community Center on O?ahu. The singer's widow, Marlene Kamakawiwo?ole, and sculptor Jan-Michelle Sawyer were present for the dedication ceremony.

[edit] Legacy
Kamakawiwo?ole's recording of "Over the Rainbow/What a Wonderful World" reached #12 on Billboard's Hot Digital Tracks chart the week of January 31, 2004 (for the survey week ending January 18, 2004), and passed the 2 million paid downloads mark in the USA as of September 27, 2009.

Somewhere Over The Rainbow The Best Of

Unforgettable (With The Makaha Sons Of Ni'ihau)