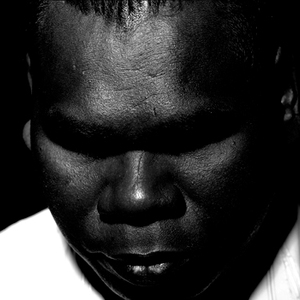 Geoffrey Gurrumul Yunupingu (born 1970) is an Indigenous Australian musician. Born blind, Yunupingu is reknowned for his beautiful singing voice. In 2008 Yunupingu was nominated for four ARIA awards, winning the awards for Best World Music Album and Best Independent Release. He also won three Deadlys, including Artist of the Year, Album of the Year for "Gurrumul" and Single of the Year for "Gurrumul History (I Was Born Blind)". A former member of Yothu Yindi, he is now with Saltwater Band whose members are all from Galiwin'ku on Elcho Island.

Yunupingu was born in Galiwin'ku (Elcho Island), off the coast of Arnhem Land, Northern Australia about 580 kilometres from Darwin. He is from the Gumatj clan of the Yolngu and his mother from the Galpu nation. He was born blind, has never learned Braille and does not have a guide dog or use a white cane. Yunupingu speaks only a few words of English, and is said to be acutely shy.

Active musically from 1988, Yunupingu plays drums, keyboards, guitar (a right hand-strung guitar left-handed) and didgeridoo. It is the clarity of his singing voice that has attracted rave reviews. He sings stories of his land in both languages (G?lpu, Gumatj or Djambarrpuynu, all Yol?u Matha) and English.

Formerly with Yothu Yindi, he is now with Saltwater Band.