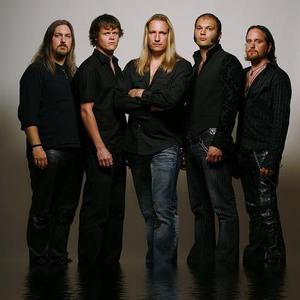 There are at least 3 bands called Insania: 1) Power metal band from Stockholm founded in 1992. 2) Hardcore/Crossover band from Brno (Czech Republic) founded in 1987. Also known as Skimmed from 1988-90. 3) Power metal band from Germany 1) Insania was founded in 1992 by two musicians from Stockholm - Mikko Korsb?ck (drums) and Henrik Juhano (guitar). They are now known as Insania Stockholm. The goal was to write and play music in the vein of Helloween, Gamma Ray and Blind Guardian. Henrik had earlier played in various garage bands.


1) Insania was founded in 1992 by two musicians from Stockholm - Mikko Korsb?ck (drums) and Henrik Juhano (guitar). They are now known as Insania Stockholm. The goal was to write and play music in the vein of Helloween, Gamma Ray and Blind Guardian. Henrik had earlier played in various garage bands. In the band was also bassist Tomas Stolt, who left the band after a short while, to play in with other acts, but returned in 1996 and has been with the band since. Mikko knew a guy from school whose name was Niklas Dahlin, and he became the second guitarist of the band. After keyboardist Patrik V?stil? and vocalist David Henriksson from the northern parts of Sweden had joined - (Mikko had earlier handled the vocals, but wanted to concentrate on the drums from now on, since singing had become too tiresome) - the line-up was complete.

They released two demos followed by their first studio album in 1999, called World of Ice. It was followed by Sunrise In Riverland one year later. The album was recorded in Finnvox studios with renowned producer Mikko Karmila. After the release, several gigs followed in Sweden.

The band has lost and replaced many members over the years. In 2001, after a short tour with Saxon, David Henriksson decided to leave the band and return to his hometown in northern Sweden, since he did not feel any motivation to continue anymore. After a short search, the band found a new and very talented singer in Ola Hal?n from Nacka. Returning to Finland, the band started recording their third album. Mikko Karmila was once again recruited for the producing duties, and Fantasy - A New Dimension was released in February 2003 - almost half a year after the recordings.

At the end of 2002 keyboardist Patrik V?stil? told the band he wanted to quit, to focus on his studies. The band found a new keyboardist in Dimitri Keiski, who was recommended by Ola Hal?n, who knew him since earlier. Shortly thereafter, both guitarists Henrik Juhano and Niklas Dahlin left the band for personal reasons. Fortunately, the thirty-one year old Peter ?-stros from Haninge (a suburb of Stockholm) took their places. It was decided to continue with only one guitarist, so as to give more space to the keyboards. A new demo was recorded between December 2003 and January 2004 with four new songs, showcasing the abilities of the new line-up regarding the composing of songs and the versatility of musical skills.

In the summer of 2005, the band signed a record deal with Swedish label Black Lodge (Sound Pollution). The band is currently in preproduction mode for their fourth full length album, heading for the studio in the autumn of 2005, for a spring 2006 release.


2) The fire shot out a night sparkle
Which flew up to the astral sky
And then turned its course for the silent solar power plant on the cliff
It is here... the time when we are free and stars decipher a message for us:
God is insane... join him!

This is how the origin of the Fellowship of Insania is described by the myth. Another complementary version states that whole the above described scene took place on the screen of a high-power cybernetic machine and it was 30 000 years before Christ. "Only an erring soul could dare to doubt this pure truth," my Grandpa used to say at the fire in the evening and all the elders nodded their heads in approval. Nevertheless, we can partly turn away from folk legends today, and without lowering its meaning we rather simply track real analogy of the stated story in a conventional space and time.

Encyclopedia Lunatica under the item "Insania" states only several rather not flattering lines: "Trio of melancholicly based cynics devaluing pure mystics with black humour mainly in the sphere of music and literature. See Cult Insania [p. 11.666:4]. Such an incomplete characteristics we cannot label any other way but disgraceful, of course.

The anonymous author and the follower of wicca art in his Guide of the Left Hand Track mentions at least the therapy of full-moon and the big dead spider behind the window that in the childhood influenced the developement of Poly's psych? in a substantial way and at the same time he also states the complete discography of the music section of Insania [p. 200]. (We state the pages for serious researchers to help them to orientate in reference sources.)

"Sterile normality will be smashed by purging insanity," is stated in the annals of the music body themselves and this keyword/slogan is in a simple form encoded in the stripe code that has been determined as the symbol of Insania.

But my Grandpa also used to say: "If we are to observe the schizophrenic duality of this group, we have nothing left but forget the sphere of myths, pass on to conventional facts, because that's what the dark side of the group is about and say that the music basis of Insania is in hardcore, punk and ordinary songs." And all the men sitting around the fire nodded their heads.