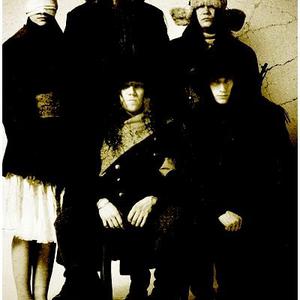 The Finnish Black/Dark Metal band Ajattara was formed in 1996, in Helsinki, Finland. The sound has been described as of primordial nightmare. Attempting to describe their music in less abstract terms, one could always mention it is predominantly mid-tempo, riff-heavy black metal with distant, astral synths. Yet that is just a lame scratch on the surface when dealing with such a true enigma as Ajattara undoubtedly are.

As those fortunate enough to have heard the obscure demos the main man Ruoja (guitar, vocals) created in his lone cabin in the woods during late nineties know, the Ajattara sound has been decidedly constant. Ruoja is Pasi Koskinen, the singer of Amorphis until their album "Far from the Sun". The line-up was finally completed with Malakias I (drums) and Atoni (bass) in preparation for the recording of the first album "Itse" (?Self?). The album made a remarkable impact on the public with its brutal, yet crystal-clear sound and the sheer strength of the material itself.

Special heed must be given to Ajattara's lyrics, remarkable for being poetic, yet disturbing and haunting as only a bad dream arising from deep dank soil of the local woodlands can be. Blood-feud, murder, moons rising crimson... to begin with. As with those who partake of the flesh of gods, the listeners of Ajattara will never be quite the same again.

The release of "Itse" also brought Ajattara out as a live-band, complete with additional three live-session musicians for maximum impact. Many successful shows later it was time for their sophomore album "Kuolema" ("death"), deadly as its name suggests and a logical follow-up to "Itse". The cold, barren earth bid all welcome to its embrace - with no goodbyes and no fancy headstones. This was black metal Finnish style, with an oppressive aura that is not just fa?ade.

Enter album number three. "Tyhjyys" (?emptiness?) saw Malakias I complete his service and retreat to the shadows again, with a veteran of many music styles, Malakias III replacing him.

Ajattara's fifth album was released in 2007 and this time arose Kalmanto, yet another skin-thrilling piece of nightmare.

Acoustic Black Metal album "Noitumaa" was released in 2009. The whole idea behind the album was that when bands do acoustic albums they suck. And Ajattara didn't.

In the same year "Joululevy" was released. It contains the all the Christmas singles + couple of new tracks. This also was the end for record deal with Spinefarm.

In February 2012 our drummer Malakias IV was found dead in his flat, may he rest in Peace, you will be never forgotten!

In April 2012, in a Facebook official statement, the band announced its end.